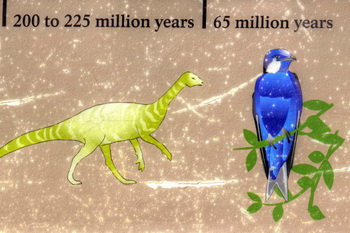 All the major science news sites – whether Science Now, Nature News, New Scientist, Science Daily, Live Science, the BBC News, and National Geographic – repeated the same narrative essentially unquestioned, never doubting the ages or the evolutionary spin.  The narrative is basically that this DNA from a horse hoof is six to ten times older than the previous record, suggesting that even older DNA might be found and sequenced.  Comparisons of the fossil DNA with those of other horses, the narrative goes, places the common ancestor twice as far back as previously thought, some 4 million years ago.  Nature News put it this way:

The humble horse has provided the oldest full genome sequence of any species — from a specimen more than half a million years old, found frozen in the permafrost of the Canadian Arctic. The finding, published in Nature today, pushes back the known origins of the equine lineage by about 2 million years, and yields a variety of evolutionary insights.

The articles don’t hide the surprise that DNA could last this long.  Science Now quoted a paleontologist remarking, “It was not that long ago that people in the field of ancient DNA would have said you can’t retrieve data from something this old, but here we have a whole genome.”  Another said, “It’s well beyond the time period where I thought we had any prospect of getting a genome.”  New Scientist mentioned that the DNA was found alongside pockets of collagen, a protein that “degrades easily“.

The explanation is that the permafrost preserved it.  That, however, requires believing nothing changed the climate or geology of the location for nearly a million years.  Rather than doubting the date, scientists and reporters are claiming the new record opens up more opportunities to study evolution in ancient DNA, including samples from human ancestors like Homo erectus.  National Geographic made a prediction based on an estimate of DNA’s decay rate:

Studies on the half-life of DNA suggest that even under ideal circumstances, DNA sequences older than 1.5 million years will be too short to be readable. So it’s highly unlikely that DNA will be recovered from dinosaurs, since they disappeared 65 million years ago, except for the lineage leading to modern birds.

Did National Geographic hedge its bets because of the soft-tissue findings in some dinosaur bones?

The claim that horses have evolved over the alleged 700,000 years seems illogical, given that it may “theoretically be possible to resurrect the ancient horse by implanting a modern horse egg with the ancient DNA,” as Nature News stated.  Has there been no speciation in all that time?  Some of the articles waffled on how similar the fossil horse would have been to living horses, but one spokesman said he believed it was probably a one-toed horse.  Live Science punned, “That means that horses and their ancestors are evolving more slowly than expected — it’s more of an evolutionary trot than a canter.”

Science Daily quoted one of the team members noting that some assembly was required:

“This was methodologically challenging but clearly some parameters worked better than others, says Professor Eske Willerslev. But sequencing was just half the way really.” Professor Willerslev continues: “Because 700,000 years of evolution and damage, it is not something that does come without any modification to the DNA sequence itself. We had to improve our ability to identify modified and divergent ancient horse sequences by aligning them to the genome of present day horses. Quite a computational challenge, especially when the level of DNA modification outcompasses that seen in any other Arctic horses from the Late Pleistocene.“

Dr. Orlando explains: “Levels of base modifications were extremely high, for some regions even so high that every single cytosine was actually damaged. This, and the phylogenetic position of the ancient horse outside the diversity of any horse ever sequenced, provided clear evidence that the data was real.”

The DNA was unquestionably real, but the fit to an evolutionary story required interpretation.  National Geographic noted that “sequenced 12 billion DNA molecules, of which 40 million [were of] horse origin.” What else was in the mix?  “There was a bit of horse DNA in an ocean of microbial DNA.”  Most of the DNA was in the form of fragments of 25 base pairs or less, that had to be aligned with genomes of modern horses.

Dating depended on molecular clock hypotheses (i.e., estimates of how quickly the genome evolved) and some geological dating of ash  layers in the permafrost. Molecular dating depends on estimates of “divergence events” in evolutionary theory.  From assumed dates of divergence, they inferred a mutation rate for horses.  This approach, however, is heavily theory-laden, and requires arbitrary tweaking to make things work out, as this quote from the authors’ Supplementary Information file illustrates:

Using relative rate tests, we found that the genome-wide mutation rate is slightly faster in humans than horses (Supplementary Information, section 8.4). The average value of 10-9 substitutions per year per site [Nachmann and Crowell 2000], long considered as a reliable estimate of the human genome-wide mutation rate, has recently been challenged. Lower values about half this mutation rate have been proposed [Conrad et al. 2011; Kong et al. 2012; Campbell and Eichler 2013], with possible important implications for reconstructing the evolutionary dynamics of the human populations [Scally and Durbin 2012]. In particular, with genome-wide mutation rates lower-than-expected, most major evolutionary events in human evolution would have occurred earlier than previously thought. However, recent clock calibrations of the mitochondrial genome mutation rate have rejected older time scales for human evolution, challenging calibrations based on lower mutation rates [Fu et al. 2013]. Given the present absence of consensus regarding the actual value of the human nuclear mutation rate, we considered a value of 10-9 substitutions per year per site [Nachmann and Crowell 2000] as a maximal estimate for the horse mutation rate.

The authors scoured their reconstructed genome for signs of natural selection, since they considered Equus “a group representing textbook examples of evolutionary processes“.  Although candidate regions of “positive selection” between the old horse and the new were sought, only some modifications to existing genes, like immunity and olfaction, were found.  The original paper in Nature said, “We caution that local variations in mutation and recombination rates, as well as misalignments, may result in similar signatures at neutrally evolving regions.” In other words, their candidates for positive selection could be due to genetic drift.  Nothing indicating novel function or innovation was reported.

Despite criticisms of the horse series by evolutionists themselves (3/02/01, 3/18/05, 6/30/05, Willerslev called the fossil sequence “a classical example in evolutionary biology and a topic which is taught in high schools and universities.”

Darwin skeptics should be incensed at the leaps of faith taken by the researchers and their dupes in the media.  Why is nobody but CEH challenging the ideological, procedural and illogical red flags in this story?  For all we know, this horse perished in the Ice Age after the Flood just a few thousand years ago.  Who can dispute that?  Look at the ample fudging and gymnastics the authors went through to turn this story into an offering to Father Charlie.  Understand that their narrative does not emerge from the observational facts.  Data are mere props to their pre-determined plot: to make horses look like products of a long line of evolutionary descent with modification requiring millions of years.  For crying out loud, they could reconstruct this stallion’s pony in a living mare!  Where is the evolution?

The implications of this find should disturb evolutionists.  DNA decays – probably much faster than the upper limits they put on it.  Many aspects of this story were surprises to evolutionists: the survival of ancient DNA, the earlier common ancestor (which remains to be discovered), the modernity of the old horse, the interfertility of all horses, the lack of evidence for “positive natural selection” in over 700,000 years.  Yet after decades of criticism of the iconic horse evolution series, they still call it a “classical example in evolutionary biology” and a “textbook example of evolutionary processes”.  A classical example this lame could never walk out of the starting gate in the Darwin Derby, let alone trot.

An old Sioux proverb states, “The best strategy when riding a dead horse is to dismount.”  As evolutionists continue to beat this dead horse with alacrity, sensible people should pity them, asking, “When will they ever learn?”  Live Science tried to be funny: “Researchers are chomping at the bit to further understand how domestication has shaped horses, and what their genetic history can tell us about how climate change has affected their evolution,” the article ended.  Bits are not very nutritious.  The rest of us will chomp at the smorgasbord, thank you.