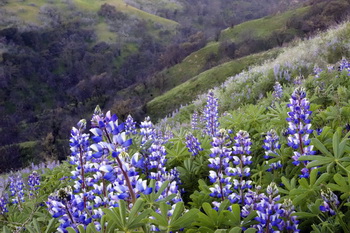 For food, for visual pleasure, and for the health of the whole planet, plants are worth loving and learning about.

Chemical library:  An article on Science Daily says that a leaf is an astonishing chemical factory:

Plants are capable of making tens of thousands of different small molecules — an average leaf for example, produces around 20,000. Many of these are found in a typical diet and some are already known to have medicinal properties with effects on health, diseases and general well-being.

The article goes on to say that the immune system benefits of dietary flavonoids—known to be nutritious as well as cancer fighting—can be dramatically altered by very small chemical changes such as methylation at various parts of the molecular scaffold.  The findings by researchers at the University of York were discussed in a panel discussion titled “Nature’s Marvellous Medicines” held by the Royal Society.

Inner qualities:  A plane flying over vineyards in Australia is monitoring the “inner qualities” of grapevines, Science Daily reported.  The “hyperspectral camera” is looking at the entire spectrum of wavelengths of emitted molecules from the plants, hoping to identify markers of plant health and nutrition.  A plant’s “inner qualities” can directly affect their health-giving benefits for humans.

Self-fertilizing crops:  Helping plants to fix nitrogen would “really revolutionize agriculture,” another article on Science Daily reported—and scientists at Washington University at St. Louis are nearing that goal.  They don’t have to re-invent the process: they just need to get cyanobacterial technology inserted into crop plants.  Though abundant in the atmosphere, molecular nitrogen (N2) is difficult to “fix” by splitting it to form ammonia and other usable compounds because of its tight triple bonds.  Some plants form symbiotic associations with nitrogen-fixing bacteria in their roots.  These bacteria contain nitrogenase enzymes that split the molecules at ambient temperature, much more efficiently than the energy-intensive Haber process man came up with in the 20th century.

Steering plants to use readily-available nitrogenase would mean no more expensive fertilizer production, no more bat guano mining, and much cheaper and more productive crop yields.  One of the tricks the research team is overcoming is adding the benefits of nitrogenase to plants without hindering photosynthesis.  PhysOrg reported another approach being achieved at Caltech: the construction of synthetic nitrogenase enzymes.  They’ve made significant progress but their product is not ready for mass production: “Each catalyst molecule was only able to convert seven nitrogen molecules before running out of steam.”  Natural enzymes work continuously for years.

Plant protection:  Researchers at Dartmouth are discovering facts about a system that allows plants to tolerate drought, flooding, salt and other stresses.  “Plant roots use their endodermis, or inner skin, as a cellular gatekeeper to control the efficient use and movement of water and nutrients from the soil to the above-ground parts of the plant,” Science Daily explains.  This “gatekeeper” is made up of lignin produced by the plant cells, forming a layer called the “Casparian strip” that gives the plant robustness against environmental stresses like salinity and drought.  Researchers found a protein called ESD1 involved in layering the lignin and binding it together in the Casparian strip.  Understanding this process might lead to improving the production and quality of crops and biofuels.

Clean air act:  Live Science provided a list of indoor plants that are best for cleaning the air in the home.  Everyone learns in school that plants absorb carbon dioxide, but “scientists studying the air-purification capacities of indoor plants have found that plants can absorb many other gases” such as cigarette smoke, benzene, formaldehyde and other volatiles emitted by plastics, detergents or synthetic products.

“God’s green earth” is blessed beyond our understanding by the presence of plants.  Compare the dry, dull surfaces of the moon and Mars with our abundant-life planet.  Using intelligent design, we can steer existing plant technologies for our benefit – technologies that we cannot easily reproduce, but that give plants their vitality, longevity and productivity.

For many fruits and vegetables, the benefits come from eating them raw.  Learn to enjoy the richness of unprocessed plants as a significant part of your diet.  Many can be prepared for good taste and enjoyment without cooking, juicing, blending, dehydrating, or other destructive processes.  Plant foods are filled with cancer-fighting compounds and health-enhancing chemicals among those 20,000 molecules in an average leaf.  Many modern people have arguably less knowledge of useful plants than the natives that inhabited their lands first.  The knowledge and enjoyment of healthful plants is a worthwhile skill to work on.

None of these articles had any use for evolutionary theory.*  Why?  It’s useless.  We need to turn science back toward the improvement of human life.  Good science seeks understanding, with the goal of application for good purposes.  Storytelling is the opposite of understanding.

*The nitrogenase article claimed that “this entire nitrogen-fixing apparatus” “evolved once and only once” and then was repeatedly “lost” in bacteria: “Studies of the evolutionary history of 49 strains of cyanobacteria suggest that their common ancestor was capable of fixing nitrogen and that this ability was then repeatedly lost over the course of evolution.”  Like we said, evolutionary theory is useless.  The common ancestor (if there was one) already had it, and then others lost it.  What kind of explanation is that?  How does it help Darwin?  How did the ancestor get it?  By chance?  By magic?  Let’s be done with unobservable just-so stories and deal with what we can know and use.