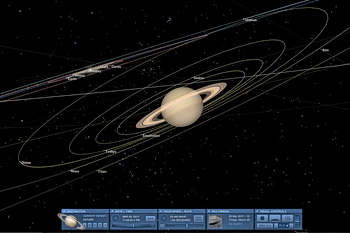 Just add pebbles, stir, and get a planet. Is it real science, or just a game show?

Eric Hand is on hand at Science Magazine to tell us how Jupiter and Saturn were born from pebbles:

By Jove, they’ve done it! Planetary scientists have overcome a key problem in explaining the emergence of the solar system’s behemoths—Jupiter and Saturn. Previous models predicted too many gas giants. But a new study shows how just a few such monsters should emerge from a swirling protoplanetary disk of gas and dust.

“We can now start with a pretty simple disk, pretty simple physics, and reproduce the outer solar system—and that’s never been done before,” says Hal Levison, a planetary scientist at Southwest Research Institute in Boulder, Colorado, who led the study.

In light of this history, it seems a bit audacious for Levison to leap over the accretion problem, as if that problem was solved years ago (8/30/07). That’s the spin Eric Hand puts on it: the answer, my friend, is blowing in the wind:

The model builds on a theory, called pebble accretion, that explains the formation of cores. Small dust grains can grow as they collide and stick together with static electricity. But beyond a certain size—about a meter—growth stops as collisions rupture the dust ball rather than add to it. This “meter-scale problem” was surmounted about a decade ago, when theorists realized that pebbles less than a meter in size are constantly moving in the wind of the spinning gas disk. When they encounter other pebbles, they clump together and take advantage of a wake in the wind of gas, like flocking birds. These clumps quickly reach a size where they are gravitationally bound to one another. “That solves the meter barrier—you go directly from pebbles to 100-kilometer-sized things, almost overnight,” Levison says. These “embryos” then coalesce and add more material until they reach the size of a core.

In fact, Hand continues, the process is so efficient, you get too many embryos. Levison’s problem was an abundance of riches. He had to pare down the gas giants into a number that resembles our solar system.

But in simple models, pebble accretion had its own problem: It was too efficient. In many simulations, dozens or even hundreds of Earth-sized bodies tended to form. So Levison says he initially set out to “kill” the pebble accretion theory. But he ended up advancing it further, instead. His team found that by tuning the model so that the pebble formation process takes a bit longer, there is more time for the large planetary embryos to interact with each other gravitationally. All but the biggest get kicked outside the plane of the solar system, allowing the few that remain to mop up remaining pebbles and become the cores of gas giants.

Sweet. Works on the computer, at least. Just tune the parameters till the model doesn’t crash. He even gets ice giants out of it: like Uranus and Neptune, the puzzling planets he used to say shouldn’t exist (8/06/04). But to do so, he merely leapfrogs over all the difficulties. The paper shows what he assumes:

We assume that an initial population of planetesimals, which follows the surface density of the disk, forms quickly and thus exists at the beginning of our simulations…. Pebbles either also existed at the beginning of the simulation, or are allowed to form over some period of time (again, a free parameter) starting at the beginning of the calculation. The evolution of this system is followed numerically and includes the effects of gravitational interactions, interactions between bodies in the disk and the gas (although nebular tidal migration is neglected), accretion (including enhancements due to the aerodynamic drag on pebbles; see, for example, ref. 11), and collisional fragmentation.

But those are some of the worst problems: accretion, planetesimals, tidal migration. Later, more assumptions are revealed:

A computer program can work wonders with creative assumptions and tweaks. It can even spell out a Shakespearean phrase apparently at random. Whether such simulations correspond to the harsh realities of nature is a different question. The idea that pebbles grow in the windy wake of the disk was viewed as an ad hoc speculation when first proposed (8/30/07); Levison’s model just assumes it works.

Supporters of core accretion have been battling supporters of disk instability for years, each claiming their rivals’ theories don’t work. Eric Hand says that Alan Boss thinks his gravitational disk-instability model is still a contender.

Boss notes that some exoplanets far more massive than Jupiter sit in far-flung orbits tens or hundreds of AU from their stars. At those distances, it may be difficult for cores to form, because the population of pebbles is thought to die off with distance. The gravitational instability might explain those planets better than core accretion, Boss says. “I think there’s room for both mechanisms,” he says.

Boss is using his NASA funding to tweak his preferred disk instability model, Science Daily reports. “Solar System formation don’t mean a thing without that spin” is the Dukey headline; that may be true in more ways than one. Jillian Scudder is more enamored with Levison’s trick. “How did Jupiter and Saturn form? The answer may lie with the humble pebble.” It may not be a perfect model, but it’s a “promising start” that “will be refined as time goes on.” Models can be very flexible in a computer. The problem is, one cannot experiment with real planets. Too big; takes too long.

This is certainly not the only model out there (see another on Space.com), but the news media celebrated Levison’s new model as a great victory. In the text of Science Daily‘s coverage, though, one can see that problems are not so easily swept under the rug. “The timescale problem has been sticking in our throats for some time,” Levison admitted. But remember; for this new model, he just assumed that the pebbles were formed in the time required. “It wasn’t clear how objects like Jupiter and Saturn could exist at all,” he said, but his model was designed to produce them.

Even so, he ignored the problems of rapid migration inward, so it’s not clear if this model is useful for explaining the “hot Jupiters” seen so often around others stars. He just assumes that migration was fortuitous to produce the solar system we see:

There is another constraint that any model of giant-planet formation in the Solar System must satisfy in order to be considered a success. The distribution of small bodies in the outer Solar System indicates that the orbits of the giant planets moved substantially after they formed. In particular, Uranus and Neptune are likely to have formed within 15 or 20 au of the Sun and to have been delivered to their current orbits by either a smooth migration or a mild gravitational instability. Both processes require that a population of planetesimals existed on low-eccentricity orbits beyond the giant planets after the planets finished forming. This population must have (1) not formed planets, and (2) survived the planet formation process relatively unscathed. To evaluate this constraint in our simulations, we placed 5 planetesimals with radii similar to Pluto (s = 1,350 km) on circular, co-planar orbits with semi-major axes between 20 and 30 au. None of these objects grew in our fiducial simulation, and they all survived on orbits with eccentricities less than 0.07 (see Methods for how this behaviour varies with disk parameters). Therefore, the process of viscously stirred pebble accretion reproduces the observed structure of the outer Solar System: two gas giants, a few icy planets, and a disk of planetesimals into which the ice giants can migrate.

Science Daily quotes him crowing, “As far as I know, this is the first model to reproduce the structure of the outer solar system, with two gas giants, two ice giants (Uranus and Neptune), and a pristine Kuiper belt.” With this self-congratulatory assessment in his pocket, he’s off to expand the model to generate the inner rocky planets. Note to Nature: Pluto is falsifying the “pristine Kuiper belt” notion (7/17/15).

Methinks it is like a weaseled program, tweaked to get what he needs.

Don’t they sound like kids playing Sim-Earth? They’re in Fantasyland. The real world is not a game. Do some critical thinking, reporters!