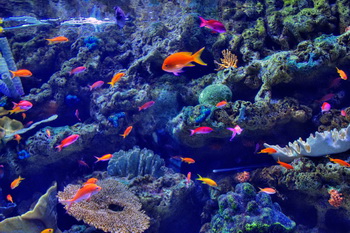 These isolated habitats should be ideal labs for studying Darwin’s origin of species, but the evidence just isn’t there.

Seamounts are undersea mountains that rise at least 1,000 meters above the sea floor. Usually volcanic in origin, many are steep-walled, with tops hundreds of meters below the ocean surface. Quite a few have flat tops, believed to have been leveled by the waves when sea levels were lower; those are known as guyots.

The study of seamounts is still in its infancy. Because of their isolation, seamounts should be labs for Darwinian evolution. We should be seeing new species unique (endemic) to individual seamount habitats. A book published in March 2010 made that prediction. In Seamounts: deep-ocean laboratories of faunal connectivity, evolution, and endemism, Timothy M. Shank of the reputable Woods Hole Oceanographic Institution wrote:

Seamount systems that are geographically, hydrographically, topographically, and/or genetically “isolated” are likely to have developed highly endemic taxa and ecosystems. Although current estimates of endemism are challenged by inconsistencies in sampling approaches, the physical, biological, and geological processes intrinsic to seamount systems can undeniably serve to connect or isolate populations, stimulate genetic divergence, drive the formation of new species, and structure diversity and endemism. In fact, the large variety of interconnected mechanisms that promote or impede the genetic connectivity of seamount communities via dispersal (and the long-term maintenance of species or the subsequent divergence of populations leading to speciation) are key unknowns to understanding the fundamental evolutionary processes that structure both the diversity and biogeography of deep-sea fauna.

Here we have a Darwinian prediction. Will it stand up to the test? Notice that Shank left himself an out, saying that not much is known about dispersal and connectivity of habitats. Still, one would think that at least some new species arising on a seamount would have a hard time colonizing the rest of the ocean.

Later that same year (2010), five oceanographers writing for Marine Ecology were already casting doubt on the paradigm that seamounts are hotspots of endemism. This year we have more new data to test the Darwinian predictions.

A team of three oceanographers publishing in PLoS One carefully surveyed life on the Cobb Seamount (see Wikipedia), an isolated undersea mountain in the northern Pacific, 500 km off the coast of Washington State. Using underwater vehicles, they explored numerous habitats and ecosystems on 220 square kilometers of its surface area, taking 1,600 images all the way from the summit that is 34 meters below the water to terraced slopes as deep as 1154 meters (almost 3,800 feet). They identified 74 taxa from 11 phyla, including sponges, algae, corals, lamp shells, lobsters, crabs, sea cucumbers, fish and much more. How did Darwinian theory fare from the observations?

In plain English, while the seamount provided numerous hotspots for a wide variety of living things, all the species they observed are “commonly found on the North American coast.” Not only did the observations refute the hypothesis of “high endemism” – the scientists state flatly, “There was no recorded endemism on the seamount.” The Darwinian prediction by Shank has been refuted by the evidence.

There are several possible comeback arguments evolutionists can use to rescue Darwinism. We know the Cobb Seamount is not pristine, having been subject to fishing activity for years. Perhaps humans mixed up the ecology. Maybe coral polyps and other larvae get around better than thought; they evolved on the coast, and made it to the top of the seamount on their own, or were transported there by ocean currents. Or they evolved on the seamount and were spread outward from where they originated. Maybe they hitchhiked on nets or boat hulls. All kinds of processes could have scrambled the ecosystems. In short; maybe seamounts are not as isolated as previously thought.

Several considerations make these auxiliary hypotheses implausible. For one, geologists date the Cobb Seamount at 3.3 million years old (Wikipedia). That should allow plenty of time for radical innovation of remarkably unique species endemic to that location. For another, many species tend to have limited ranges even on the seamount. Deeper ecosystems are different than shallow ecosystems. Would there not be very protected spots in this vast area immune to mixing? Moreover, an article on NOAA by Woods Hole biologist Susan Miller explains that colonization of seamounts is rare, particularly for delicate coral polyps that don’t live long and are weak swimmers. She describes ocean currents called “Taylor columns” that spiral around seamounts, keeping the organisms isolated. Seamounts really should be labs for watching evolution in action. The scientists seem to have expected to confirm the paradigm of endemism, judging from their first sentence:

Partially owing to their isolation and remote distribution, research on seamounts is still in its infancy, with few comprehensive datasets and empirical evidence supporting or refuting prevailing ecological paradigms.

But then, the last sentence of the Abstract confirms the biodiversity paradigm “while refuting the idea that seamounts have high endemism.”

One other factor should cast doubt on the Darwinian story that life has been evolving on seamounts for millions of years. Isn’t that a long time for corals to build up deep reefs many meters thick? Wouldn’t every square inch of the mountain by now contain the remains of dead organisms that lived millions of years ago? Yet the scientists didn’t find that.

Bedrock was a primary substrate in nearly all images (82%). Sand was always present (100%), but its coverage was nominal (a veneer or a pocket of sediment on the steep bedrock pinnacle). The most abundant substrate category was Bedrock-Sand (82%).

This implies two challenges for Darwinism: a lack of speciation, and a far younger age for the seamount than thought. Interesting that the explorers of the Cobb Seamount did not mention evolution, speciation, or any Darwinian term at all, anywhere in their report.

This refutation of Darwinian predictions parallels another one we reported in the case of the Brazilian tepui, those steep-sided “islands in the sky” that should have isolated species on their summits for millions of years. No endemic speciation was found there, either (see 8/09/12). We recall another case in the Grand Canyon, when explorers of Shiva Temple (a flat-topped butte isolated within the canyon) in 1937 expected to confirm Darwin’s origin of species taking place there, but found only the same species that exist on the rim, despite the butte having been isolated (in the evolutionary timeline) for many tens of thousands of years (see Creation Research Society report). Here are three examples where evolutionists predicted to find new endemic species forming, but they found none. Sure, there are variations in existing species, like the unique animals on the Galapagos, but even there those animals are related to species on the mainland. No new organs, systems, or new types of animals are found even after millions of years of isolation, and some of the species, like birds and insects that can no longer fly, represent degeneration, not evolution. Remember that evolutionists believe whales evolved from walking land animals in just 9 million years, and humans from apes in about 6 or 7 million years. Wouldn’t they expect at least some new phyla, orders, classes or families on seamounts after millions of years? or even new genera? They aren’t found. If prediction matters in science, and falsification, consider Darwinian theory falsified.

Readers may be interested in Dr. Walt Brown’s theory of how seamounts relate to the Genesis Flood. Noting that almost all of them occur in the Pacific, he explains them as artifacts of the rapid separation of the continents when the “fountains of the great deep” burst open along the mid-Atlantic ridge. Click here to read his account.