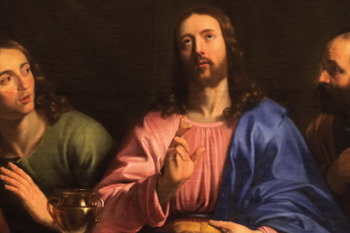 When all else fails, look to the Word of God.

News of another airport massacre today, possibly inspired by ISIS or aggravated by mental illness (TruthRevolt), leaves citizens worried with despair. What can be done to stop the tide of senseless violence? Imagine if the gunman had learned, “Love your neighbor as yourself” or “Do good to those who hate you” or “My peace I give unto you.” Those are values and principles taught in the Word of God, the Bible. Let’s look at three instances where the Bible intersects with science news for some lessons.

Poaching. Scientists, desperate to stop the crime of wildlife poaching that is threatening the world’s most magnificent animals with extinction, are at their wit’s end. Some are turning to “the faithful” for help. “With no end in sight to the illegal wildlife trade, secular organizations are working with religious leaders to help combat poaching and sales of wild creatures,” National Geographic reports. Politically correct as NG is, its article tries to treat Islam, Buddhism, Catholicism and Evangelicalism as moral equals. But is a religion that values withdrawal from the world likely to provide much help? Is a religion that blows up historic treasures and bombs children and treats women like second-class citizens likely to respond with real action for saving animals? Is a religion that values ritual the best choice? Only those who really dig into the Bible with all their heart and mind can dwell on the nature of God as a personal, holy, Creator who cares for all his creatures. (Regrettably, the article fails to mention Judaism—a hint of antisemitism?) It would seem that Bible believers such as evangelicals could have the best-informed consciences and moral worldviews to justify stopping atrocities. The Bible decries dishonest gain and exalts righteousness. Maybe Baptist or Lutheran churches in the West can’t do much to stop poachers in Indonesia. But spreading the gospel spreads the gospel’s values. Like leaven, as Jesus said, it can transform a culture of evil into the kingdom of God.

Slavery. Archaeologists in Africa have investigated symbols that seem to show how native tribes with their animistic traditions were converted to Christianity. According to Phys.org, symbols that look like a chariot wheel might reflect Ezekiel’s vision of “wheels within wheels.” That particular symbol came to represent God’s presence to early African converts who were tortured and sold as slaves. Carlene Phoenix, descended from slaves, explains:

Around the same time, as Evolution News & Views reminds us, Europeans were committing genocide among the Herero and Nama tribes in the name of eugenics and Social Darwinism. The anti-slavery movements in America and Britain, by contrast, were primarily led by Bible-believing Christians. The story shows two public benefits of the Word of God: comfort to the oppressed, and motivation to end oppression.

Racism. As shared in the 1/04/17 entry, Darren Curnoe called the dividing of humans into separate races the “biggest mistake in the history of science.” He wrongly accused the “far right” for this problem (see our analysis), but if he had read Genesis Chapter 1, he would have seen that the Bible teaches all humans are members of one family, descendants of Adam and Eve. Early Social Darwinists like Haeckel taught, by contrast, that some races were separate species from Europeans and not as advanced. And yet Paul in the New Testament said that God made all mankind from one blood or family (Acts 17:26), even calling all mankind the offspring of God (v. 29). Would not that knowledge be liberating to everyone on the face of the earth? No more caste system in India. No more racial genocides. No more ranking people by IQ. Everyone would see themselves as brothers and sisters under God regardless of skin color. If scientists proposed teaching everyone God’s word as a logical, pragmatic, one might say “scientific” solution, it would have to result in more humility, brotherly love, and unselfishness that the Bible teaches. What a world it would be if the majority of scientists believed that, if for no other reason than that it works.

Inequality. Robert J. Simpson, a Harvard sociologist, published in PNAS a study on “Urban sustainability in an age of enduring inequalities,” particularly in large cities. He is clearly concerned about “neighborhood inequalities and fissures in the civic infrastructure that potentially challenge social sustainability and the capacity of cities to collectively address environmental challenges.” Is he unaware of the liberating influence of New Testament Christianity? Paul wrote that “There is neither Jew nor Greek, there is neither bond nor free, there is neither male nor female: for ye are all one in Christ Jesus” (Galatians 3:28). In the early church, slaves had the same status as members of Caesar’s household. Is he unaware of the Protestant Reformation that elevated common work, liberating all social classes as equal in God’s sight? (The 500th anniversary of the Reformation begins this year, climaxing on Oct 31, 2017.) Is Simpson unaware that the Bible influenced America’s founding documents, stating the self-evident truth that “all men are created equal, and endowed by their Creator with certain unalienable rights”? Rather than writing pseudoscientific sociology papers in stodgy journals that offer no enduring solutions other than “theorizing and systematically measuring multidimensional urban inequalities” and throwing more government money at them, why not just tell people what God has already revealed about their equal status under God?

A modern-day Darwinist, however, thinks that the world’s moral failures, such as “rampant narcissism and social cheating,” could be fixed by teaching people more about evolution. Mike Klymkowski argues on PLoS Blogs that “teaching social evolutionary mechanisms” would resurrect values long attributed to the Judeo-Christian ethic: “honesty, cooperation, loyalty, self-sacrifice, self-restraint, mutual respect, responsibility and kindness.” As a former Catholic, he is clearly irked by what he sees:

As socioeconomic inequality grows, the publicly acknowledged importance of traits such as honesty, loyalty, self-sacrifice, and reciprocity appears to have fallen out of favor with some of our socio-economic and political elites. How many people condemn a person as dishonest one day and embrace them the next? Dishonesty and selfishness no longer appear to be taboo, or a source of shame that needs to be expurgated (perhaps my Roman Catholic upbringing is bubbling to the surface here). A disavowal of shame and guilt and the lack of serious social censure appears to be on the rise, particularly within the excessively wealthy and privileged, as if the society from which they extracted their wealth and fame does not deserve their active participation and support. They have embraced a “winning takes all” strategy.

So what is his solution? Teach people about bee colonies, starlings, and microbial communities—even slime molds (see 1/04/17). There they will see how cooperation arises through natural selection, leading to cultures that punish cheaters and reward cooperators. Wouldn’t that be nice? Like most modern social Darwinists, Klymkowsky views moral qualities in terms of behaviors that emerge from raw natural forces. “While evolutionary processes are often caricatured as favoring selfish behaviors, the facts tell a more complex, organism-specific story,” he argues. Do they? What is a “fact” in Darwin’s world, where Stuff Happens?

Given that social systems at all levels are based on potentially costly traits, such as honesty, loyalty, self-sacrifice, and reciprocity, the evolutionary origins of social systems must lie in their ability to increase reproductive success, either directly or through effects on relatives, a phenomena known as inclusive fitness. Evolutionary processes also render social systems vulnerable to cheating and so have driven the development of a range of defenses against various forms of social cheaters …. But recent political and cultural events appear to be acting to erode and/or ignore society’s defenses.

So what to do?  Revolution? From a PLoS Science education perspective, one strategy suggests itself:  to encourage (require) that students and the broader public be introduced to effective instruction on social evolutionary mechanisms, the traits they can generate (various forms of altruism and cooperation), the reality and pernicious effects of social cheaters, and the importance of defenses against them.  In this light, it appears that social evolutionary processes are missing from the Next Generation Science Standards. Understanding the biology, together with effective courses in civics might serve to bolster the defense of civil society.

There are numerous problems with Klymkowsky’s proposal. For one, he omits the bad examples in nature, where army ants invade and destroy their enemies, fungi infect bats and decimate their numbers, and invasive species displace native species. Those are not likely to help stop poaching, where animal traffickers could view themselves in evolutionary terms as invasive species on elephants and rhinos. For another, he confuses choice with fitness. To the extent a natural community achieves stability, it was not because they chose to do so, or were educated by some version of Next Generation Science Standards to cultivate costly traits. It just happened. The stable community “emerged” by natural selection without any moral teaching at all. For a third problem, Klymkowsky steals Christian values without paying the bill. What on earth does “honesty” mean to unguided natural processes? Why is cheating “pernicious”? How can he define “mutual respect, responsibility and kindness” in Darwinian terms? In his own words, the highest value is “reproductive success” – whatever it takes.

If cheating works in Darwin’s world and becomes the norm, it becomes the moral standard. Those who don’t cheat become the cheaters. In the Mockingjay movies, evil becomes the new normal, and the previous minority “cooperators” must pay with death. Certainly Panem was a stable society under President Snow. The good guys, with their concern for the hungry and poor, and their hatred of the dreaded hunger games, became the cheaters now. President Snow was doing his evolutionary duty to stamp them out! According his own theory, Klymkowsky would have to be a loyal citizen of Panem and bomb the rebels’ hospital. Or from real history, he should be a loyal Soviet and shoot the dissidents when commanded to. He should work long hours on the Siberian railroad, as a good, self-sacrificing cooperator for The Regime. Why not? In amoral, relative world of Darwinian evolution, one person’s freedom fighter is another’s terrorist.

Christianity defines the terms that Darwinians envy, and infuses them with richness and meaning. Kindness is not just an evolutionary artifact. It is a moral imperative, exemplified by none other than the Creator himself: “Oh give thanks to the Lord, for He is good, For His lovingkindness is everlasting” (Psalm 107:1). Does the Darwinist value self-sacrifice? Love? Jesus said, “Greater love hath no man than this, that a man lay down his life for his friends” (John 5:13). Then he proceeded to do just that: “But God commendeth his love toward us, in that, while we were yet sinners, Christ died for us” (Romans 5:8). Show a little gratitude, Darwinian. That doesn’t evolve, either.