Another research team finds dinosaur blood in a rib bone. This one breaks records for age, over double previous reports.

The rib of a long-necked, plant-eating dinosaur that lived 195 million years ago has yielded what may be the oldest remains of soft tissue ever recovered, scientists said Tuesday.

The first photo with the article appears to show spherical dark stains that could be the remains of blood cells and possible osteocytes: 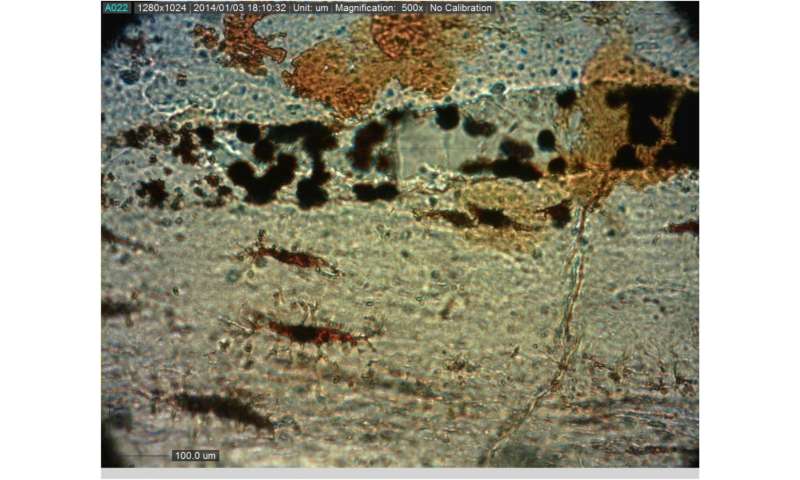 A thin section of the rib of the 195 million year old dinosaur Lufengosaurus, cut along the length of the rib showing a vascular canal with dark hematite particles. These were probably derived from the iron rich blood cells of the living dinosaur, and would have provided the internal environment for the preservation of collagen. Lacunae, where adult bone cells would reside, are also preserved with dark hematite particles inside them. Credit: Robert Reisz

Lacunae are channels in bone that carry blood vessels and nerves. What the caption calls lacunae appear in the photo to be intact osteocytes (bone cells), complete with delicate filopodia. The article claims original non-mineralized protein is present.

They found evidence of collagen proteins within tiny canals in the rib and concluded they were “probably remnants of the blood vessels that supplied blood to the bone cells in the living dinosaur.“

New techniques with synchrotron radiation-based nano-transmission X-ray microscopy (SR-TXM) used by the researchers primarily from Taiwan, with Robert Reisz from Canada, allowed intact imaging without damage. This no longer requires dissolving away the bone, like UNC researchers (Mary Schweitzer and team) had done earlier.

Most previous studies had extracted organic remains by dissolving away other parts of the fossil, the team said.

With the synchrotron method, this is not necessary, and even older remains may be uncovered without damaging dinosaur bones in future.

The article repeats the common assumption that “finding fossilized soft tissue is very rare indeed.” But with the synchrotron method, perhaps scientists will begin seeing more of it, now that they know what to look for. The dinosaur is a Lufengosaurus, a type of long-necked sauropod first discovered in China. Here’s what the open-access paper in Nature Communications says:

Various skeletal elements of the sauropodomorph dinosaur Lufengosaurus from the Lower Jurassic (Early Jurassic, Sinemurian, 190–197 Mya) of Dawa, Lufeng County, Yunnan Province, China, were studied in detail; however, surprisingly, it is the rib materials that produced the most significant results (Fig. 1a–m). Adult compact bone (including ribs) is composed of osteons with central vascular canals (Fig. 1b–h) that contain blood vessels and nerves in the living organism and lacunae, or spaces for the adult osteocytes (Fig. 1m).

[After describing the imaging techniques, they report:] The results indicate that native collagen was preserved within the osteonal central vascular canals, together with haematite particles that were likely derived, at least in part, from haemoglobin of the dinosaur.

Schweitzer’s team had also reported original collagen, but their dinosaur was dated at less than half the age: 80 million years instead of 195 million years. If Schweitzer’s date for preservation was incredible, how much more this far “older” specimen? (Click here for list of articles on Schweitzer’s soft-tissue research.)

Update 1/31/17: Not many science sites have reported this stunning find yet, but the BBC News did. Reporter Helen Briggs offered some responses to this “‘startling’ dinosaur protein discovery.” Paleontologist Robert Reisz confirms that they found original material: “We are actually looking at the preservation of the original materials that were in the living organism rather than an impression of the soft tissues that were there.” Scottish dinosaur-hunter Stephen Brusatte was shocked:

Stephen Brusatte of the University of Edinburgh, who is not connected with the research, said the discovery was “a jaw-dropper“.

“To find proteins in a 195-million-year-old dinosaur fossil is a startling discovery,” he told BBC News.

“It almost sounds too good to be true, but this team has used every method at their disposal to verify their discovery, and it seems to hold up.”

He did not call into question the date, however, preferring to remain a moyboy and change his assumptions about how long soft material might survive.

The paper in Nature Communications suggests the following explanation: “We propose that haematite cementation may have played an important role in the preservation of these organic remains, isolated within the vascular canals by haemoglobin-derived haematite aggregations.” This was the explanation first suggested by the Schweitzer team. Mark Armitage, though, who has done independent studies of intact soft tissue in dinosaur bone, does not accept the idea that iron from hemoglobin can preserve the delicate details he has seen with his electron microscope.

Update 2/02/17: The press release from Reisz’s institution, the University of Toronto, includes a photo of the skeleton as found in the ground in China, and also another micrograph of the soft tissue.

Think about this: if scientists were already astonished at preservation for 80 million Darwin years, how much more for 195 million? Did the 115-million-year difference even exist? Wouldn’t it be far more credible to think all these dinosaurs lived and perished around the same time?

We can’t let the DOPE peddlers get away with revisionism. They’re going to try three main talking points: (1) Protein actually can survive hundreds of millions of years, and these bones prove it, because they are 195 million years old (proof by assertion). (2) Iron from blood preserves original protein. (3) Now that we have dinosaur protein, we can learn more about evolution; isn’t that wonderful?

This is what they are already saying. It’s time to turn up the heat on these fake-science peddlers. We know that they were shocked with utter disbelief that any original tissue could last even one million years, let alone 80 or 195 million. It’s not possible. It’s time to wage war on the moyboy myth, armed with this powerful empirical evidence. Who has the science on their side now?