One reporter in a campus Press Relations office shouldn’t be able to influence the world’s view of science.

Look at this over-the-top headline from Cambridge University: “Bag-like sea creature was humans’ oldest known ancestor.” I mean, really. Come on. This is your daddy? 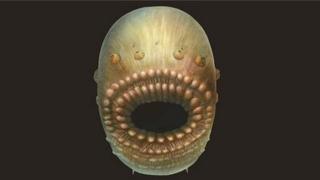 You’re not looking at a medieval helmet, but an artist’s impression of a “microscopic, bag-like sea creature, which lived about 540 million years ago,” according to some anonymous reporter in the Cambridge press office with a hyperactive imagination. The tiny fossil, about 1 millimeter in diameter, was found in China by sifting through sand. Exaggerations that this represents a ‘human ancestor’ should be subject to swift reproach by reasonable scientists. But they weren’t. Instead, all the world’s media immediately jumped to promote this new ‘finding of science,’ differing only in the creativity of their own over-the-top headlines and how much they enlarged the original artwork.

The normally-conservative Fox News story even includes a video with four excited young reporters gushing over how this 1-millimeter organism that hid among grains of sand hundreds of millions of Darwin Years ago is “our great-granddaddy” that “plays a key role in evolution” and shows “the evolutionary connections we have to animals that don’t look like us at all.” Not a word of skepticism can be found in any of these reports, even though the original paper in Nature says nothing about ‘ancestor’ or ‘human.’ Co-author Simon Conway Morris, a Cambrian fossil expert, would probably disdain any such characterization (see him in the film Darwin’s Dilemma, where he confirms the abrupt appearance of Cambrian animals—a very anti-Darwinian confession).

How did it come to this, that journalists would become DOPE pushers?

A welcome breath of skepticism appeared on the American Council on Science and Health website. In “How to Spot a Fake Science News Story,” Alex Berezow rips into the mess that science journalism has become. We last encountered his opinion on 2/04/13 where he challenged New Scientist and got them to admit their bias. Now, after a total of six years as a science reporter, he says he has “reached two disturbing conclusions about the craft” –

First, too many science journalists don’t actually possess a well-rounded knowledge of science. In many cases, regular reporters are asked to cover complex science and health stories. What we end up with is entirely predictable: Articles that are nothing more than rehashed press releases, topped with click-bait headlines based on exaggerations and misunderstandings of the original research….

Second, science journalists are every bit as biased as their more traditional counterparts, perhaps even more so. They routinely hold double standards in regard to analyzing science policies. They conflate scientific evidence with science policy, immediately labeling anyone “anti-science” if he or she disagrees with their cultural beliefs. Worse, science journalists feel no inhibition whatsoever to cheerlead openly for their favorite politicians and to heap scorn upon those they dislike. Just read Twitter.

Those observations fit the “bag-like human ancestor” hype exactly. We have called out this problem repeatedly (see, for instance, 12/23/16, 12/16/15 and other entries in the category Issues/Media). Berezow follows up with 9 tips for spotting Fake Science: e.g., #5, “The article is sensationalized; i.e., it draws huge, sweeping conclusions from a single study” (hear that, Pallab Ghosh?). His tip #9 is witty; “The article is about evolutionary psychology” – thus he calls all of it fake science. Berezow’s article led to a lively discussion in the Comments. Berezow’s article was welcomed at Evolution News & Views, where David Klinghoffer listed 10 tips of his own for spotting fake news about intelligent design. (Note: Berezow is not an ID advocate, but Klinghoffer suspects “proponents of intelligent design will be nodding in affirmation as they read his excellent post.”)

On a related story, veteran journalist and author Tom Bethell has a new book out: Darwin’s House of Cards: A Journalist’s Odyssey Through the Evolution Debates. David Klinghoffer introduces it on Evolution News & Views with a challenge to science reporters: “A skeptical look at evolution is not beyond your powers.”

We are one science site that does what the others should be doing: journalism. We check the empirical data on which claims are based with a critical eye. If it’s good work, we say so and show why. If it’s bad, we say so and show why. You don’t get rehashed press releases here. You don’t get cheerleading here. We cast down idols of the Bearded Buddha and clean up the mess of sacrificial brains left at his feet. That’s why our readers are so loyal. Now, help spread the word.