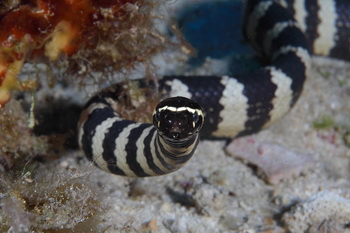 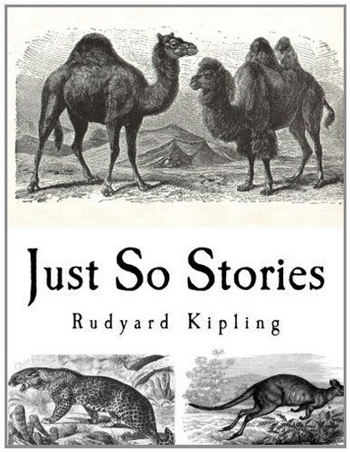 The phrase ‘Industrial melanism’ is like ringing Pavlov’s bell to reporters, who salivate at the expectation of peppered-moth candy. When Current Biology used the term in a study of sea snakes that underwent a color change off the coasts of industrial areas, reporters drooled at the thought of delicious sea-snake hot dogs in Darwin buns. Out came the Kipling-style Just-So Story headlines:

So will school textbooks now include this new icon of evolution? Will school boards be intimidated into pushing DOPE [Darwin-Only Public Education] in science classes? If so, it won’t be because of scientific evidence supporting neo-Darwinism. The paper briefly looks back to the old peppered moth story, but ratchets up the perhapsimaybecouldness index, admitting:

The melanic morph appears to be a derived trait in E. annulatus [the sea snake], but the number of independent evolutionary increases in the frequency of melanism is unclear. A single origin may have been involved, as in peppered moths, but occasional melanism is geographically widespread in E. annulatus.

There is almost no mention of natural selection in the whole paper except for hypothesized ‘selective advantages’ in the last two paragraphs that might be leading to the change.

What alternative hypotheses could explain the high frequency of melanism in seasnakes from urban-industrial habitats? Melanin plays diverse and important physiological roles. For example, enhanced immune function in melanin-rich individuals might be advantageous in polluted sites where the animals are subject to chemical stresses, or melanism might protect snakes from high UV levels in clear shallow water. Ecological advantages to melanism (such as local color matching to the habitat, to avoid visual predation) or reproductive advantages (mate choice) seem less likely: there are no clear differences in habitat use between banded and melanic snakes in our study populations, and a snake’s color appears to play little role in mate recognition.

In summary, melanism has evolved under diverse selective advantages. Intriguingly, the seasnakes we studied in the Indo-Pacific exhibit the same correlation as seen in insects and pigeons in European cities: melanism is more common in urban-industrial environments. However, the selective advantages underlying that common pattern may involve antipredator camouflage and physiological benefits in insects versus trace-element excretion in pigeons and seasnakes.

In science, ‘might’ doesn’t make right. If something might have happened a certain way, that doesn’t mean it did happen that way. The authors did no work to see if the color change was caused by a genetic mutation (which neo-Darwinian theory relies on), whether it actually confers a benefit on the snakes (which natural selection requires), or whether the change is heritable (without which there is no evolution). And as with the case of peppered moths, the variant already existed. At best, then, this is only a case of a shift in the ratios of existing phenotypes of a single species. No ‘origin of species’ has occurred. New Scientist admits,

The study does seem to suggest the sea snakes are evolving in response to industrial pollutants, says Susana Clusella-Trullas at Stellenbosch University in South Africa. But she wants to know whether black sea snakes have higher survival rates and more offspring than their paler peers in these polluted environments.

See sea snakes evolving? Only if you strongly wish to. Remember the old Peppered Mice incident (8/28/09, 4/18/03). And what about black cats and black panthers? Are coal miners covered with industrial soot evolving into a new species? Industrial melanism is a vacuous phrase. It neither explains the variation nor amounts to a hill of macroevolutionary beans.

The snakes may be sick. They might be reacting to pollutants in the water. If you find a person with jaundice, would you say she is evolving camouflage to fit in with sunflowers? Come on; these are the same species. No evolution is occurring. 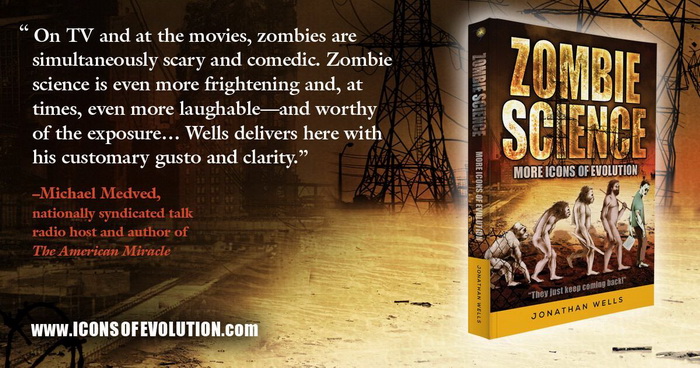 Recommended Resources: Iconoclast Jonathan Wells deals well with these types of stories in Icons of Evolution (2000) and Zombie Science (2017).