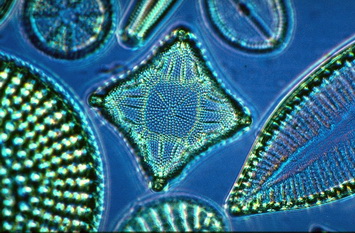 Some of the most beautiful, elegant, and vital organisms on earth demand a better explanation than ‘stuff happens over and over.’

Your life depends on tiny glass architectures that were not even visible until the invention of the microscope, except in vast numbers in certain geological formations. These creatures are microscopic algae called diatoms. There are 100,000 species of diatoms, says an open-access paper in Nature Scientific Advances, distinguished by the exquisite glass ‘houses’ they build. The eight authors of this paper now have demonstrated that the glass structures called frustules, that fit together like two sides of a pill box, actually protect the cells’ DNA from damage by ultraviolet light.

….Diatoms are single photosynthetic algal cells populating the oceans and waters around the globe. They generate a considerable fraction (20–30%) of all oxygen from photosynthesis, and 45% of total primary production of organic material in the sea. There are more than 100,000 species of diatoms, classified by the shape of the glass cage in which they live, and which they build during algal growth. These glass structures have accumulated for the last 100 million of years, and left rich deposits of nano/microstructured silicon oxide in the form of diatomaceous earth around the globe. Here we show that reflection of ultraviolet light by nanostructured silica can protect the deoxyribonucleic acid (DNA) in the algal cells….

We saved the opening and closing of that paragraph for consideration separately. So far, we have learned that these are absolutely vital to the health of the biosphere. We’ve read that there is a tremendous variety of them. We’ve learned they exist in vast numbers, forming thick deposits of diatomaceous earth, even though the date of 100 million Darwin Years we would dispute. New to this paper, we’ve seen that the glass has a function of protecting the cells’ DNA from UV light.

Surely the eight Darwinian biologists can demonstrate the evolution, can’t they? An investigation of the paper says, ‘No.’ First, we learn that evolutionists have puzzled over this question for over a century since the fraud Haeckel illustrated some of them.

Since the time of Ernst Haeckels elegant illustrations of diatoms in his Kunstformen der Natur, the evolutionary causes for the existence of the nanostructured glass cages, frustules, confining diatoms have been discussed. Special proteins, the silaffins and cingulins, extract silicates from water and build the frustules along a chitin-based scaffolding network in geometries specific for different species. The open structure allows material transport but with some limitations; therefore, filtering has been suggested as a reason for their existence. It has also been suggested that the frustule gives mechanical protection from predators; experiments have verified that mechanical strength can be improved.

Some of the causes that have been suggested sound like intelligent design:

In more recent times, it was noted that the somewhat periodic 10–100 nm patterns of holes, slits and ribs, are reminiscent of the geometries of photonic bandgap structures…. It has also been noted that the frustules may act as small spectrographs, focusing photons into specific volumes inside the diatom, possibly for absorption in chlorophyll and other chromophores.

Others have hypothesized that the frustules are lenses, or act as photonic structures. These authors focus on a different view: “Protection from UVR may be a reason for the evolution of frustules.” If they had simply said, “A reason for the frustules,” nobody would likely dispute the suggestion. The scientists do, in fact, establish that the shells are good at filtering out UV light. But can the Stuff Happens Law suffice as a cause for them?

In their Conclusion, the Darwinians add to the fallacy by saying that stuff happens repeatedly:

We suggest that the redistribution of UVR due to SiO2 frustules is an important evolutionary cause of the presence and evolution of frustules in diatoms, by decreasing the rate of UVR-induced degradation of DNA inside the cells. This will improve the energy budget for the photosynthesizing cell, as well as reduce mutations. These weak effects may be sufficient to help explain the surprising number of different diatom species with varying geometries generated by convergent evolution.

A basic course in philosophy of science should render such statements illogical. First of all, evolution is causeless, so “evolutionary cause” collapses to a sophoxymoronic phrase. Darwinian evolution is by definition unguided, aimless, and purposeless. One cannot look at existing function and say evolution “caused” it, any more than one can say an “accident caused” a golf ball to land in a hole without a golfer. Causation implies direction that is predictable. If evolution had been the predictable cause in the case of diatoms, then why didn’t all microbes, cells and plankton evolve glass houses?

Also illogical is the notion that evolution caused diatoms to reduce mutations. In neo-Darwinian theory, mutation is the seed-plot of innovation. Reducing mutations would seal the fate of diatom evolutionary progress, leaving the first glass-protected species unchanged for millions of Darwin Years, not diversifying into 100,000 species. One would expect a single species locked in its un-evolving genome, or degrading and going extinct by other means of DNA decay besides UV light.

Finally, “convergent evolution” (Darwin Flubber) is not a cause able to generate anything. It’s an empty after-the-fact phrase that assumes evolution (circular reasoning). And even if it were a ’cause’ able to generate new species, why would it generate varying geometries? The geometry of a diatom frustule has little or nothing to do with UV protection; otherwise, the best UV protecting geometry would flourish, and the others would go extinct. The 100,000 vibrant species demonstrate that almost any geometry is successful at UV protection.

The authors, therefore, have explained nothing about diatom ‘evolution.’ They have only exposed the sad truth that vacuous ‘explanations’ can still get published in the world’s most prestigious journals.

We’ve got to stop them. Darwinians are leading the public down the primrose path to stupidity, pretending to explain things by cause and effect, when actually embracing the opposite of causation (“stuff happens”). Their bad storytelling habit is bad for science in many ways. Here are two of them: (1) it misleads the public into thinking that Darwinism ‘explains’ everything in nature, when it explains it away with hot air, and worse (2), it distracts attention from the really important aspects of diatoms: the exquisite beauty, wonder, and variety of some of God’s most elegant creations that not only serve the biosphere but showcase His glory and creative genius. We’ll keep quoting Romans 1:19-22 till these pseudoscientists see their reflections in its mirror:

For what can be known about God is plain to them, because God has shown it to them. For his invisible attributes, namely, his eternal power and divine nature, have been clearly perceived, ever since the creation of the world, in the things that have been made. So they are without excuse. For although they knew God, they did not honor him as God or give thanks to him, but they became futile in their thinking, and their foolish hearts were darkened. Claiming to be wise, they became fools….

There’s causation and explanation for you.