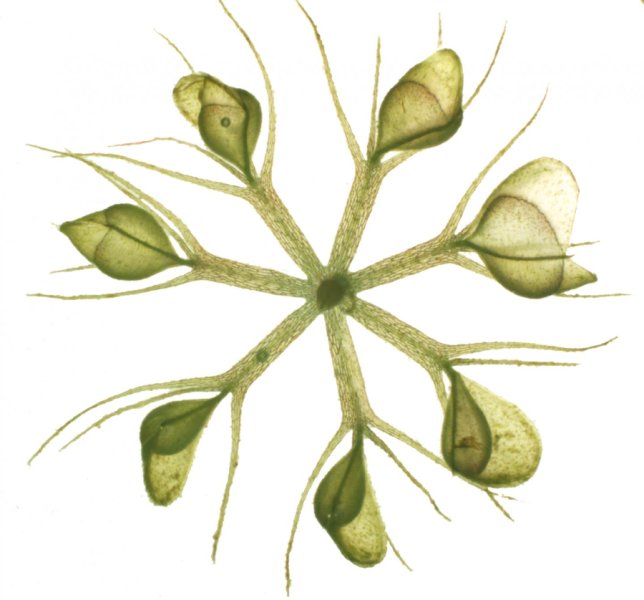 Two plants that baffled Darwin are best admired for their design than for their evolution.

Most people have seen the hinged snap-shut cages of the Venus flytrap. Some know that the insides of the leaves have three trigger hairs each, which must be touched twice in succession at a minimum interval of time for the trap to work. There’s another carnivorous plant called the waterwheel plant that also fascinated Darwin. He asked how they could have evolved, but isn’t it more scientific to just observe and describe these wonders of nature, and understand the requirements for their success?

Venus Flytrap “Teeth” form a ‘Horrid Prison’ for Medium-Sized Prey (The American Naturalist). The traps would not be nearly as effective without their “marginal spikes” that mesh when the trap is closed. Scientists experimented on the traps and found that medium sized prey could struggle out when the spikes were removed. Darwin called the trap a “horrid prison” and commented on its advantage to the plant, but did he really explain its origin? Notice what evolutionists have to assume took place by chance:

Botanical carnivory is a novel feeding strategy that has arisen at least nine different times in evolutionary history of plants. Pitfall traps evolved independently at least six times and sticky traps five. The snap traps characteristic of the Venus flytrap, however, have most likely evolved only once in the ancestral lineage. Darwin was the first to document evidence for carnivory in flytraps, and proposed that the cage-like structure enhances prey capture success.

Of course the trap “enhances prey capture success,” but does that prove anything about Darwin’s theory? The idea “it’s effective, therefore it evolved” commits circular reasoning. The “Stuff Happens Law” (natural selection of random mutations) would have a hard time waiting for all the ingredients for this plant’s trap mechanism to ‘arise’ together: the cup-like leaves, the trigger hairs, the digestive juices, the turgor pressure providing rapid closure, and the marginal spikes. Think of the faith required to imagine this one plant “evolved only once” in some mythical “ancestral lineage.” That’s evidence against evolution, not for it. Without all of these traits working together, no prey would be caught. The plant doesn’t actually need carnivory, anyway; it could just avoid nitrogen-poor soils and act like a regular plant somewhere else.

A Varied Menu:  biologists have analyzed which animals are captured by the carnivorous waterwheel plant (University of Freiburg). Another marvelous plant that catches insects uses a different trap mechanism. It’s not picky about what it catches, biologists found at the University of Freiburg. They investigated the “menu” of the waterwheel plant by inventorying what prey landed in the traps over a period of time. Results showed that the plant “catches anything and everything that fits into its trap and triggers the snap mechanism.” The press release compares the two plants:

Using its snap traps, which are only a few millimeters in size, the waterwheel plant catches prey animals that live underwater. The traps snap shut within about 20 milliseconds of mechanical stimulation. The basic trapping principle of the waterwheel plant is the same as the terrestrial Venus flytrap (Dionaea muscipula). However, the two types differ not only with regard to the mediums in which they live, that is water and air respectively, but also in the size, rapidity and movement mechanics of their traps. The researchers believe it is important to establish whether the plants have adapted to catching special types of prey, in order to better understand their ecology and evolution.

And yet nothing about their evolution came out of the study. Notice the admitted speculation:

Since the waterwheel plant occurs in highly fragmented habitats, which may be very different in terms of the composition of their animal inhabitants, the diverse diet of Aldrovanda could be an advantage over a stricter prey specialization, the researchers speculate.

That’s circular reasoning again. The trap is advantageous, for sure: that is an observation. Speculating about where it came from, though, is “speculation” based on the prior commitment to the Darwinian view, “it’s effective, therefore it evolved.” It’s not at all obvious that the Stuff Happens Law can create a trap that can close in 20 milliseconds and catch all kinds of insect prey, including tiny snails, and digest them.