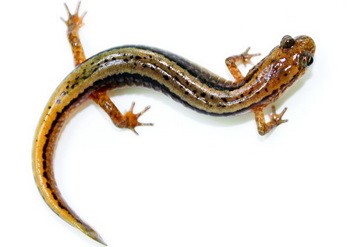 What constitutes a sister taxon to tetrapods?

Ever since Prof. Edward Drinker Cope identified a lobe finned fish called Eusthenopteron from Miguasha in Quebec, as a promising ancestor of four footed animals, the question arose as to what features in a fish would need to change to bring about the invasion of the land.1 From the time of Cope’s study in 1892 until 1998, Eusthenopteron was considered the quintessential link to tetrapods. This was a large fish, 5-6 ft (1.5-1.8 m) long. The paired robust limbs were considered to show striking similarities to tetrapod limbs. Then along came Panderichthys. This fossil had been first collected in Latvia in 1972. A description of the fish was published in 1998.2 Catherine Boisvert agreed in 2005 that Panderichthys was the closest tetrapod relative currently represented by complete fossils.3 So, what did this latter fish have going for it that Eusthenopteron did not?

Apparently Panderichthys’ claim to fame was its pectoral (front) fins. However, the pectoral girdle was still connected to the skull so head flexibility was not good.4 Like Eusthenopteron, this was a large fish (1.5m long).4 The pectoral fin was so impressive that scientists speculated that the fish could pull itself along by means of these front appendages. They even said that its locomotion on land was like “front wheel drive” “powered by body undulation and pelvic fins as anchors.”5 Boisvert further reflected concerning this fish’s possible motility: “The disparity between the pectoral and pelvic fins and girdles of Panderichthys demonstrates that the transformations from fin to limb first began in the pectoral appendage and that most of the transformations in the pelvic appendage must have taken place between Panderichthys and Acanthostega [tetrapod] nodes of the tetrapod stem lineage.”5 In that case, most of the evolution would have occurred in an unobserved gap. She concluded that this fish was incapable of hindlimb-propelled locomotion in that the pelvic fin was small and not weight bearing.5 The pelvic fin in this latter fish was actually smaller than in Eusthenopteron and so was actually less promising for a connection to the tetrapods.3 So far, the forward evolutionary progress wasn’t impressive.

There is another feature of Panderichthys which we might consider. That is the possession of digits. Specialists were now able, by means of CT scans, to peer into fins to examine the bones therein. Underneath myriad small bones (lepidotrichia), the CT scans reveal some heavier bones. Catherine Boisvert et al. declared in 2008: “Panderichthys is not an anomaly: like Tiktaalik [its successor as closest sister taxon to the tetrapods] and other fish members of the Tetrapodomorpha, it has distal radials that can be interpreted as digit homologues.”6 Indeed, concerning this feature, Boisvert et al. wondered whether Panderichthys is closer to tetrapods than Tiktaalik.7 With Eusthenopteron closer to tetrapods than Panderichthys (in pelvic fins) and Panderichthys perhaps closer to tetrapods than Tiktaalik in appearance of interior bones in the pectoral fin, all this demonstrates that “the fish-tetrapod transition was accompanied by significant character incongruence in functionally important structures.”7 What they were saying was that no straightforward evolutionary progression could be detected.8

The story has continued as we turn our attention to Tiktaalik. This latter fish was discovered in Nunavut (far north of Canada) in 2004 and described in print in 2006.9 Fellow scientist Ahlberg declares that Tiktaalik is clearly a transitional form, more tetrapod-like than Pandorichthys on the basis of its breathing and feeding apparatus.10 It is a fact that both Tiktaalik and Elpistostege (the current claimant for sister taxon status) display a pectoral girdle not connected to the skull.11 This feature is unlike Panderichthys and means that these latter fish would have a more flexible head, even perhaps a neck. Nevertheless, Ahlberg emphasized that “In some respects Tiktaalik and Panderichthys are straightforward fishes…”10

As far as the question of possible digits in the pectoral fin of Tiktaalik are concerned, Ahlberg cautioned that “Although these small distal bones bear some resemblance to tetrapod digits in terms of their function and range of movement, they are still very much components of a fin. There still remains a large morphological gap between them and [tetrapod] digits.10 He further cautioned: “[I]f the [tetrapod] digits evolved from these distal bones, the process must have involved considerable developmental repatterning.”10 The connection between tetrapod fingers and the bones in these fish fins was not entirely obvious. 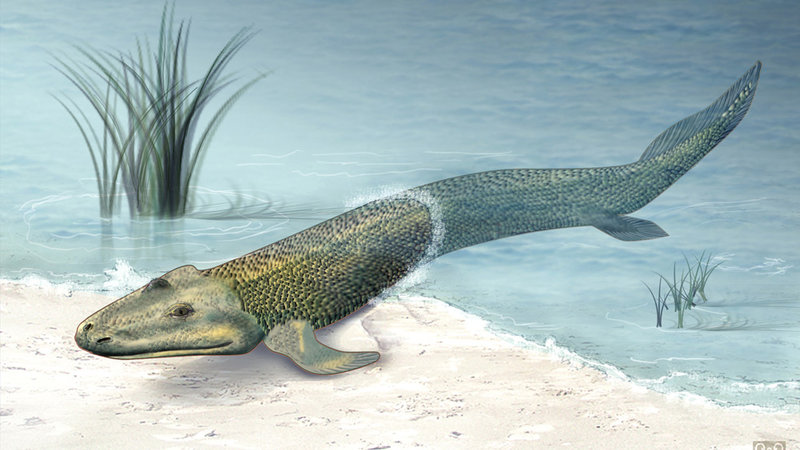 Elpistostege, drawn to look as if it is evolving onto land. (Zina Deretsky, National Science Foundation).

Our story now returns to Miguasha, where we started with Eusthenopteron, to the description of Elpistostege watsoni, now claiming the title of sister taxon to all tetrapods. Another large fish (1.5 m long), this whole specimen was discovered in 2010 very close to the bottom of the deposit. Like the other fish already described, Elpistostege’s claim to significance comes from its pectoral fin. The pectoral girdle is not connected to the skull, as in Tiktaalik, definitely a positive feature. However the pelvic fin again appears small and very far removed from the pectoral fins. This distance is 41% of the body length between pairs of fins for Elpistostege compared to 43% of Tiktaalik. Both were very long fish with weak pelvic fins.11

It is the parallel unbranched distal radials within the pectoral fin of Elpistostege that could potentially be considered “true digits” declare the authors of the 2020 article. They admit, however, that any impact of the fancy radial bones in the pectoral fins on locomotion, would be obscured by all those other thin bones, the lepidotrichia.12 They speculate that in due course perhaps, the thin bones might have disappeared. Thus, they declare: “The pectoral fin anatomy of Elpistostege provides a window into how fish developed digit-like structures within typical fins that retained lepidotrichia, and while these fish still occupied an aquatic lifestyle.”12 The authors further opine: “The presence of both digit-like distal endochondral elements and lepidotrichia in Elpistostege demonstrates that the basic architecture of the vertebrate hand evolved while the pectoral appendage was a ‘typical’ functioning aquatic fin.”13 That is certainly a case of having your cake and eating it too!

The authors suggest that if we define the tetrapod condition by the possession of digits14 then potentially Elpistostege could qualify as the “earliest and most primitive tetrapod.”12 Of course this fish does not really have digits but merely some heavier bones inside the fin. Obscure definitions notwithstanding, we know that a tetrapod is not defined by fingers, but by two sets of functioning limbs. To declare that “all organisms are tetrapod which are derived from the first sarcopterygian [lobe-finned fish] to have possessed digits homologous with those in Homo sapiens,” does not make it so.14, 15

Will the Real Transitional Form Stand Up?

In summary, Elpistostege is a rare but large whole fish located almost at the bottom of a catastrophic assemblage of extinct fish species in the Escuminac Formation. There is nothing in its anatomy to suggest that it lived in any way other than as a fish. The bones inside the pectoral fins did not in any way function like digits since they were buried inside typical fish fins. Nevertheless, these scientists speculate that Panderichthys, Tiktaalik, and Elpistostege may have pulled themselves and wriggled along the shore or shallows in the manner of catfish today. They call this “front wheel drive”5. What makes them think that such forays would encourage the development of actual limbs, back and front? 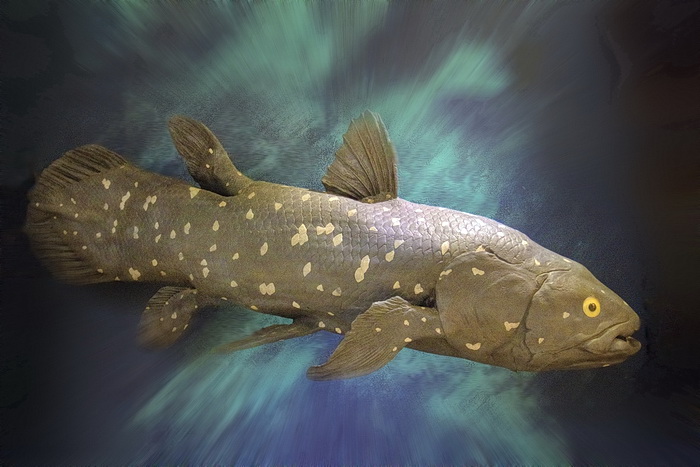 Coelacanth, a sarcopterygian fish that lives today by swimming in deep water, not by crawling onto land. From display at Wyoming Dinosaur Center (DFC)

We have all heard about Jean-Baptiste Lamarck and Charles Darwin and their espousal of inheritance of acquired characteristics (for example, the giraffe’s long neck). The idea is widely assumed to have been long discredited. But it is alive and well in speculations relating to ancestry of tetrapods. Ahlberg, in discussing Panderichthys in 2006 declared: “The implication is that function changed in advance of morphology.”10 Standen et al. in 2014 promoted the idea that the impact of behavior in these fishes could promote evolution. Thus, they concluded “We hypothesize that phenotypic16 plasticity, as a response to rapid and sustained environmental stresses, may also facilitate macroevolutionary change.”17 And “Similar developmental plasticity in Devonian sarcopterygian fish in response to terrestrial environments may have facilitated the evolution of terrestrial traits during the rise of tetrapods.”17

And what about Elpistostege? The authors suggest that digit-like bones developed inside fins which did not benefit from these structures until after the many associated thin bones had disappeared. They do not know that this actually happened, but assume that it did. Anyway the authors conclude that changes happened in the fin “as these fish began to foray into shallow water or briefly onto land.”12 Again we see scientists who advocate behavior as promoting evolutionary change (evolution of acquired characters). These cited articles were all published in Nature, so presumably this concept passes for respectable science.

Nevertheless, Miguasha’s claim to fame is its catastrophically buried fish community.1 It should not be famous for sister taxa to tetrapods because all the specimens that have been discovered are totally fish. We see in this situation, the case of another transitional form that is entirely missing. 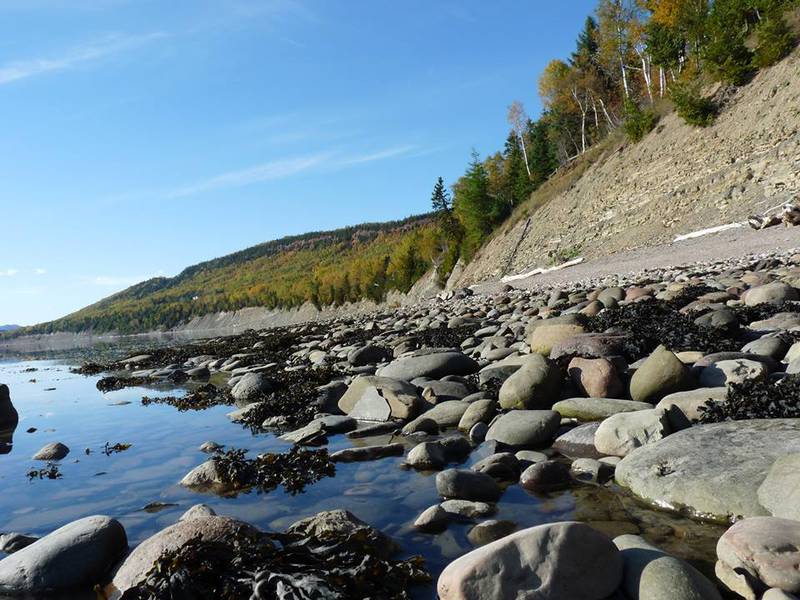 Cliffs of Miguasha National Park, where a catastrophic assemblage of fish were buried rapidly.

Margaret Helder completed her education with a Ph.D. in Botany from Western University in London, Ontario (Canada). She was hired as Assistant Professor in Biosciences at Brock University in St. Catharines, Ontario. Coming to Alberta in 1977, Dr Helder was an expert witness for the State of Arkansas, December 1981, during the creation/evolution ‘balanced treatment’ trial. She served as member of the editorial board of Occasional Papers of the Baraminology Study Group in 2001. She also lectured once or twice a year (upon invitation) in scheduled classes at University of Alberta (St. Joseph’s College) from 1998-2012. Her technical publications include articles in the Canadian Journal of Botany, chapter 19 in Recent Advances in Aquatic Mycology (E. B. Gareth Jones. Editor. 1976), and most recently she authored No Christian Silence on Science (2016) which promotes critical evaluation of scientific claims. She is married to John Helder and they have six adult children.