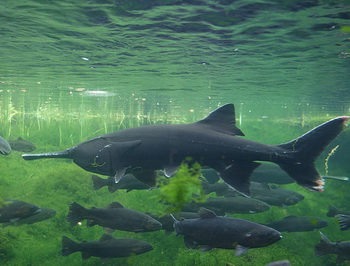 Animals may be more capable of sharing genetic information than coming up with it de novo.

What is a sturdlefish? It’s a cross between a sturgeon and a paddlefish. But this is no silly riddle for middle schoolers. It’s a reality that biologists thought was impossible: two species of fish from different continents that interbred and produced live offspring, even though their “common ancestor” supposedly lived 184 million years ago.

Scientists accidentally create ‘impossible’ hybrid fish (Live Science). At a Hungarian fishery this year, “Much to the surprise of [Attila] Mozsár and his colleagues,” two different species that should be incompatible got together and had little fishies. “It shouldn’t have been possible, but it was,” Stephanie Pappas writes:  “The birth of long-nosed, spiky-finned hybrids of Russian sturgeons and American paddlefish.”

Nevertheless, they were able to breed —— much to the surprise of Mozsár and his colleagues. The researchers were trying to breed Russian sturgeon in captivity through a process called gynogenesis, a type of asexual reproduction. In gynogenesis, a sperm triggers an egg’s development but fails to fuse to the egg’s nucleus. That means its DNA is not part of the resulting offspring, which develop solely from maternal DNA. The researchers were using American paddlefish sperm for the process, but something unexpected happened. The sperm and egg fused, resulting in offspring with both sturgeon and paddlefish genes.

Hundreds of “sturdlefish” are swimming in the tank now. It is not known of those could have fertile offspring. Many other unusual hybrids, like ligers (lion + tiger) or zonkeys (zebra + donkey) or good old mules (horse + donkey) are sterile. The surprise in this case, though, is that the sturgeon and paddlefish are said to be separated by 184 million Darwin Years of evolution – much more distant than the other hybrids. They are also separated by the Atlantic and Pacific oceans. What’s an evolutionist to do with this situation? The story in Phys.org by Bob Yirka attempts a cover-up:

Both of the parent fish are endangered, and they would not have had any chance of reproducing in the wild—as their names suggest, the paddlefish live in the U.S. and the sturgeon live in Russia. They are both considered to be “living fossils” by scientists because they have not changed very much over a very long period of time. The researchers note that it is believed their last common ancestor went as far back as 184 million years ago—when the dinosaurs were still roaming the Earth. They also note that the two fish species have more in common than many might think—they both have spiral valve intestines, for example, and scaleless skin and cartilaginous endoskeletons. The researchers also believe the offspring, like most crossbred offspring, are infertile.

Pappas asks her Darwin expert to give a simplistic story of why evolution is true anyway:

However, the fact that fish separated by 184 million years of evolution could cross-breed indicates that they’re not so different after all.

“These living fossil fishes have extremely slow evolutionary rates, so what might seem like a long time to us isn’t quite as long of a time to them,” Solomon David, an aquatic ecologist at Nicholls State University in Louisiana, told the Times.

In short, the evolutionary theory rescue consists of three parts:

The rescuers also use Darwinese to shield the surprise from the public: calling these fish “living fossils” applies a counter-intuitive term to an observation that should falsify both the Darwinian theory and the Darwinian timeline. Isn’t “living” and “fossil” a contradiction? If these fish have been evolving separately for 184 million years, would anybody expect them to be interfertile now? Notice how the scientists were surprised. They felt this was impossible.

Typical hybrid forms grown in the lab tank (Genes). Notice the variations from the same batch of eggs.

The open-access paper by Mozsár and 12 colleagues is published in Genes.1 Let’s see if they have a better explanation.

Former experiences on the hybridization of acipenserids and paddlefishes support the assumed inability of the hybridization of taxa with such a high phylogenetic distance separating them. Still, the cross of female Russian sturgeon and male American paddlefish, as a negative control for gynogenesis, resulted in viable hybrids. The fertilization, hatching, and survival rates of these hybrids were close to that of the pure maternal species. The progenies exhibited two ploidy levels (triploid and pentaploid) due to spontaneous polyploidization, relating to external morphological and meristic characteristics.

The reproductive success of these two distant species could be the combined consequence of the ancient genome duplication (180 Mya, that occurred in the common ancestor of the two families) and the slow evolution rate of acipenserids. The theory of slow evolution was reinforced by the “small” morphological differences of the living sturgeon species, the smaller substitution rates of mitochondrial or nuclear genes, and the slower protein evolution, compared to other fish species. This theory has been recently confirmed by a detailed evaluation of the sterlet genome. Since the common sturgeon genome duplication, the sterlet genome has not formed back to a diploid state, and structural and functional elements have been found on the tetraploid level in unexpectedly high degree. These phenomena could lead to a higher similarity, compatibility, and flexibility among the sturgeon genomes and allow the hybridization between Russian sturgeon and American paddlefish despite the large geographical, physiological, and morphological distances.

Basically, this explanation says evolution is slow when evolution is slow. Hybrids can form when the two species have similar polyploidy levels. Nothing new here; they still have to deal with the lack of evolution for 180 million years (give or take a few million Darwin Years, which are flexible constructs anyway).

Evolution survives because its believers have endless loads of Darwin Flubber, which is like Silly Putty in more ways than one. With their silly flubber, they can make evolution run super-fast or super-slow, make it diverge or converge, or whatever is needed to keep King Charlie happy.

This is another hybridization surprise that should perk the interest of Biblical creationists. It should be astonishing enough (to evolutionists) that the mountain men (of European stock) could have children easily by native American squaws (descended from Asians) despite “evolving” separately from who-knows-how-many tens of thousands of Darwin Years (more than 32,000 years? see Science). But 180 million Darwin Years? Come on. Both of these observations lead one to believe that the earth is far younger than evolutionists believe. With mutation rates as high as they are, genetic incompatibilities should occur far sooner than they do.

Another point of interest to creationists regards the potential for non-Darwinian variation. Hybridization and introgression (the back-crossing of hybrids into parent stock) involve sharing of existing genetic information – not the emergence of beneficial innovations by chance mutations. See Evolution News, 30 Nov 2016: “Species were once thought to keep to themselves,” Elizabeth Pennisi says in Science. “Now, hybrids are turning up everywhere, challenging evolutionary theory.” The new findings are “Shaking up the tree of life,” her article says. Perhaps the cichlid fish and armored sticklebacks so celebrated by Darwinians can be explained by these processes, not by random mutations and natural selection.

Biologists long ago accepted that microbes can swap DNA, and they are now coming to terms with rampant gene flow among more complex creatures. “A large percent of the genome is free to move around,” notes Chris Jiggins, an evolutionary biologist at the University of Cambridge in the United Kingdom. This “really challenges our concept of what a species is.” As a result, where biologists once envisioned a tree of life, its branches forever distinct, many now see an interconnected web.

Hybridization, says Mallet, “has become big news and there’s no escaping it.”

The discovery of rampant gene flow through hybridization and introgression implies that the history of animal variations since the “genetic bottleneck” of the Flood could be more dynamic than expected. This is known to occur in butterfly wing patterns (see Evolution News, 6 Dec 2019). The animal varieties seen today could have diversified more quickly by these non-Darwinian mechanisms than previously thought by creation baraminologists. The resulting phenotypes would represent horizontal distributions of traits, not vertical molecules-to-man evolution; look at the differences in the “sturdlefish” hybrids shown above. Varieties became separated as post-Flood land bridges vanished and mutations accumulated, leaving genetic incompatibilities today that are more stringent than they were thousands of years ago. These possibilities, which don’t make sense on evolutionary timescales (“It shouldn’t have been possible, but it was”), deserve further study in a recent creation framework.