Natural Selection Undoes What It Does

A theory that can explain opposites can explain anything, therefore nothing. Darwin’s chief mechanism for evolution collapses.

Three preprints from bioRxiv indicate dissatisfaction with standard evolutionary theory taught in textbooks. Why, otherwise, would these scientists be looking to improve on it or modify it?

Natural selection reverses the exaggeration of a male sexually selected trait, which increases female fitness (bioRxiv). Natural selection theory needs some tweaking. It doesn’t accomplish what people were led to believe it does, especially when sexual selection is involved. If they can’t get these things to work in the wild, maybe they can make it work in simulations:

“Novel outcomes” 160 years after Darwin; do they really have his selection mechanisms figured out? What about those peacock feathers?

A central tenet of evolutionary theory is that it requires variation upon which selection can act. We describe a means of attaining cumulative, adaptive, open-ended change that requires neither variation nor selective exclusion, and that can occur in the absence of generations (i.e., no explicit birth or death). This second evolutionary process occurs through the assimilation, restructuring, and extrusion of products into the environment by identical, interacting Reflexively Autocatalytic and Food set-generated (RAF) networks. Since there is no self-assembly code, it is more haphazard than natural selection, and there is no discarding of acquired traits (a signature characteristic of natural selection). We refer to this more primitive process evolutionary process as Self–Other Reorganisation because it involves internal self-organising and self-maintaining processes within entities, as well as interaction between entities. In the extreme, it can work with just one entity but it differs from learning because it can operate in groups of entities and produce adaptive change across generations. We suggest that this more primitive process is operative during the initial stage of an evolutionary process, and that it is responsible for both the origin and early evolution of both organic life, and human culture. In cultural evolution, this ‘evolution without variation’ process can increase homogeneity amongst members of a group and thereby foster group identity and cohesion.

Natural selection and the advantage of recombination (bioRxiv). Recombination, a process that swaps material during sexual reproduction, is often invoked as an evolutionary process. But all it does is shuffle existing genetic information – it cannot explain the origin of new genes, cells, tissues and organs.

These scientists admit to bafflement about the origin and maintenance of recombination, which natural selection should eliminate. How can these scientists rescue recombination as an evolutionary benefit? In short, they don’t. They just conclude that this problem that has “defied explanation since the time of Darwin” needs to be “viewed anew.” 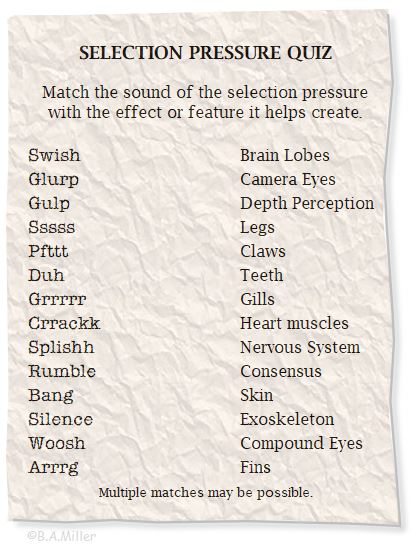 Natural selection, that theory that is held up as a model of science, with Charles Darwin the greatest of all scientists, is still baffling.

They’ve had 160 years and it keeps throwing up problems that defy explanation. What, exactly, is the “enormous body of established work on the evolution of sex” doing to increase understanding of biology – apart from keeping scientists employed in endless puzzle-solving games? What a useless theory!