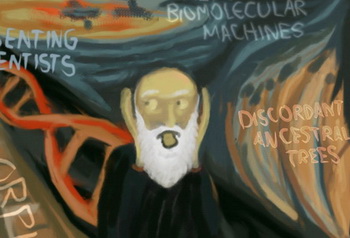 Darwinism Does Not Fit the Evidence

Darwinists have been lying, saying that “the evidence for evolution is overwhelming.” The opposite is true.

When evolutionists talk to the public, they hype Darwinism as true beyond any shadow of doubt. When talking among themselves, they wring their hands about problems with the evidence supporting their dogma. Here are some examples from this month (May 2021).

Categorical edge-based analyses of phylogenomic data reveal conflicting signals for difficult relationships in the avian tree (5 scientists writing in the preprint server bioRxiv). The authors include noted evolutionists Joel Cracraft and Steven A. Smith. Here is a digest of admissions in the Abstract:

Fossil apes and human evolution (Almécija and 5 others, Science 7 May 2021, Vol. 372, Issue 6542, eabb4363,
DOI: 10.1126/science.abb4363). The fossils we have of apes and humans do not lead to a consistent story of evolution. Though evolutionists themselves, these authors from Spain and from the American Museum of Natural History (AMNH) deny that the evidence supports the chimpanzee as the closest human relative among the apes.

Ever since the writings of Darwin and Huxley, humans’ place in nature relative to apes (nonhuman hominoids) and the geographic origins of the human lineage (hominins) have been heavily debated. … “Top-down” approaches have relied on living apes (especially chimpanzees) to reconstruct hominin origins. However, “bottom-up” perspectives from the fossil record suggest that modern hominoids represent a decimated and biased sample of a larger ancient radiation and present alternative possibilities for the morphology and geography of the Pan-Homo LCA. Reconciling these two views remains at the core of the human origins problem.

In the Conclusion section, they say that fossils must inform our narratives about evolution, but there are “limitations and gaps” in the story of human evolution. The problem is not lack of fossils. It is that the fossil record does not support a clear path from apes to humans (even though they believe it must). The last two paragraphs contain embarrassing rebukes to their fellow Darwinians:

Humans are storytellers: Theories of human evolution often resemble “anthropogenic narratives” that borrow the structure of a hero’s journey to explain essential aspects such as the origins of erect posture, the freeing of the hands, or brain enlargement. Intriguingly, such narratives have not drastically changed since Darwin. We must be aware of confirmation biases and ad hoc interpretations by researchers aiming to confer their new fossil the starring role within a preexisting narrative. Evolutionary scenarios are appealing because they provide plausible explanations based on current knowledge, but unless grounded in testable hypotheses, they are no more than “just-so stories”.

Many uncertainties persist about fossil apes, and the day in which the paleobiology of extinct species can be undisputedly reconstructed is still far away….

Christian apologetics commentator John Stonestreet at the Charles Colson Center picked up on this admission in his Breakpoint commentary for May 17. He notes with irony that on the 150th anniversary year of Darwin’s second book The Descent of Man (1871), evolutionists are admitting that the fossil trail of human evolution is “a mess.”

And yet a press release from AMNH reviewing the paper in Science gives a very misleading headline, “Review: Studying Fossil Apes Key to Human Evolution Research.” A big graphic at the top shows an ape head connected back-to-back with a human head. The initial impression is that Darwinians are heroically making progress figuring out human origins. Only down the page do they quote the lead author:

“When you look at the narrative for hominin origins, it’s just a big mess—there’s no consensus whatsoever,” said Sergio Almécija, a senior research scientist in the American Museum of Natural History’s Division of Anthropology and the lead author of the review. “People are working under completely different paradigms, and that’s something that I don’t see happening in other fields of science.”

“In The Descent of Man in 1871, Darwin speculated that humans originated in Africa from an ancestor different from any living species. However, he remained cautious given the scarcity of fossils at the time,” Almécija said. “One hundred fifty years later, possible hominins—approaching the time of the human-chimpanzee divergence—have been found in eastern and central Africa, and some claim even in Europe. In addition, more than 50 fossil ape genera are now documented across Africa and Eurasia. However, many of these fossils show mosaic combinations of features that do not match expectations for ancient representatives of the modern ape and human lineages. As a consequence, there is no scientific consensus on the evolutionary role played by these fossil apes.”

The following sentence sums up the problem with human evolution studies: “Overall, the researchers found that most stories of human origins are not compatible with the fossils that we have today.” As so often occurs when Darwinians fess up to problems in the data, they hope the solution will come in futureware. One more slam from the authors at their colleagues is found in the “Outlook” section of the paper: “It is also imperative to stop assigning a starring role to each new fossil discovery to fit evolutionary scenarios that are not based on testable hypotheses.”

Observers should be cognizant that evolutionists are hesitant to admit problems with Darwinism. For them to come out this strongly in these articles, the problems must be really serious.

No further questions, your honor. The defense has made a pretty good case for Darwinist lies without our help. 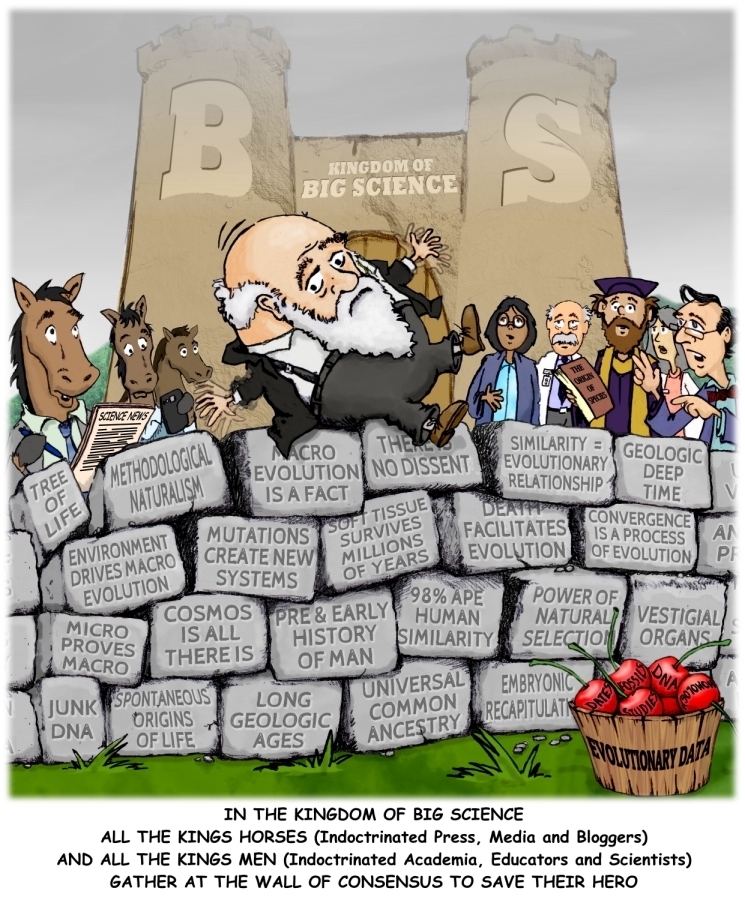 Humpty Darwin sits on a wall of foam bricks held together by decayed mortar. Cartoon by Brett Miller commissioned for CEH. All rights reserved.