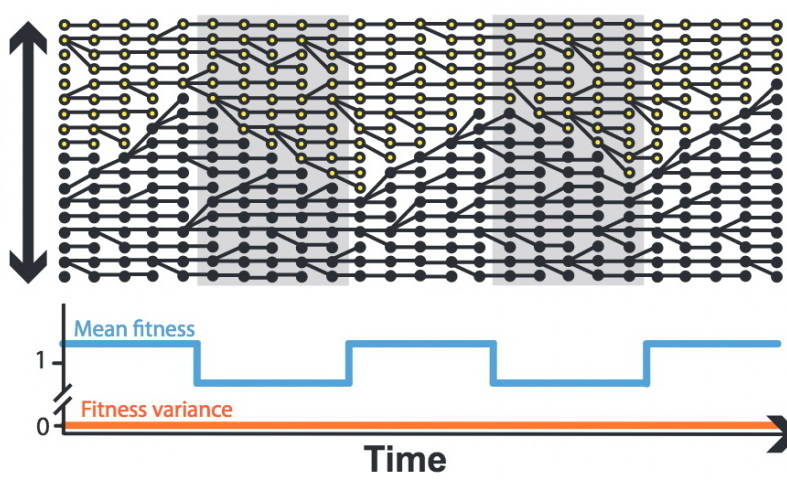 Is the field of population genetics a valid science
or an assumption-laden storytelling game?

Was that an isolated reaction, or do the problems in PopGen go deep and wide? There aren’t many population geneticists, because the math is obscure. But does mathematical rigor necessarily indicate correspondence with reality? Can the solid surface of an object conceal mush inside?

Three population geneticists writing in the Nature journal Heredity, 01 May 2021 reveal some of the assumption-making that goes on in the field. In their paper, “Estimation of coalescence probabilities and population divergence times from SNP data,” Kristy Mualim, Christoph Theunert and Montgomery Slatkin try to connect data with PopGen models. They consider genetic differences between Neanderthals, Denisovans and modern humans to try to understand their population dynamics over time. 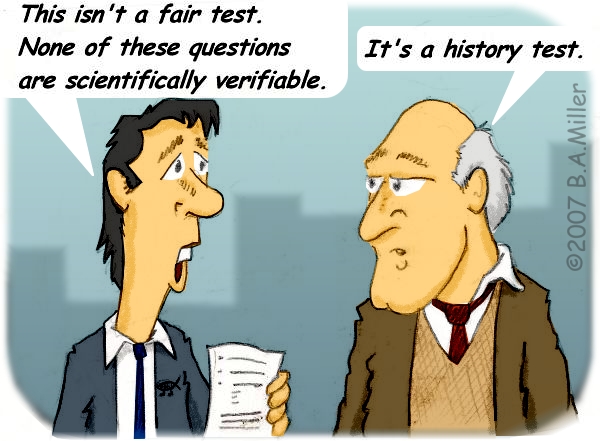 We present a method called the G(A|B) method for estimating coalescence probabilities within population lineages from genome sequences when one individual is sampled from each population. Population divergence times can be estimated from these coalescence probabilities if additional assumptions about the history of population sizes are made. Our method is based on a method presented by Rasmussen et al. (2014) to test whether an archaic genome is from a population directly ancestral to a present-day population. The G(A|B) method does not require distinguishing ancestral from derived alleles or assumptions about demographic history before population divergence. We discuss the relationship of our method to two similar methods, one introduced by Green et al. (2010) and called the F(A|B) method and the other introduced by Schlebusch et al. (2017) and called the TT method. When our method is applied to individuals from three or more populations, it provides a test of whether the population history is treelike because coalescence probabilities are additive on a tree. We illustrate the use of our method by applying it to three high-coverage archaic genomes, two Neanderthals (Vindija and Altai) and a Denisovan.

Don’t worry about the details of the three methods, because nobody can know whether they correspond with reality. They are playing games with data to try to make them “treelike” — i.e., to make them fit a Darwinian tree of evolution. Getting it to work requires weaseling with assumptions.

These authors feel their method is superior, but it fails the treelike test:

We have to conclude that our test of a treelike ancestry is not very powerful for detecting small amounts of admixture when only three populations are sampled. If our test does show deviations from a treelike history, however, the admixture levels required must be substantial or the wrong population tree is being assumed.

So in spite of all the abstruse equations above this statement, even they admit it fails. The assumptions in any method are the Achilles heel to the story. The words assume and assumption occur 49 times in the paper. Examples:

Thirteen of the weasel words (assume, assumption) occur in the final Discussion section. The last paragraph probably says all that anyone needs to know about PopGen theory applied to prehistoric situations:

One goal of our paper is to call attention to several methods for estimating population divergence times using SNP data from pairs of genomes and to examine the relationship among them. These methods have a similar theoretical basis. The differences between them are relatively minor. Most important to the accuracy of results obtained using any of them is the assumption of complete isolation of the populations after they diverged from a common ancestor and the accuracy of the mutation rate and demographic history assumed.

That key assumption, though, is wrong. Genetic comparisons show that complete isolation is a myth. There was significant admixture of genes between Neanderthals, Denisovans and “modern” humans. The second assumption about mutation rate is also wrong, being dependent on one’s beliefs about evolution and the geologic column. The third assumption about demographic history is also wrong, as our 26 June 2021 and 29 June 2021 articles demonstrate; human skulls show up in surprising places at unexpected times. New Scientist just admitted the next day that “New fossil finds show we are far from understanding how humans evolved.”

So what, exactly, are these PopGen experts trying to do? Is this some kind of mental game, like SimEarth or Mad Libs, that may be entertaining but has nothing to do with real life? There may be some occasions where population genetics intersects with reality, like the broken clock that is right twice a day. If so, those occasions are not evident in these papers, and were clearly erroneous in Fisher’s “fundamental theorem of natural selection.”

Evolutionists will perennially be “far from understanding how humans evolved,” because humans didn’t evolve. It’s a fruitless quest. They’re like the man in a round room trying to find a penny in the corner. Charlie told them the tree is out there in imagination-land; all they need to do is find it. Job Security for Storytellers was born (25 June 2014).