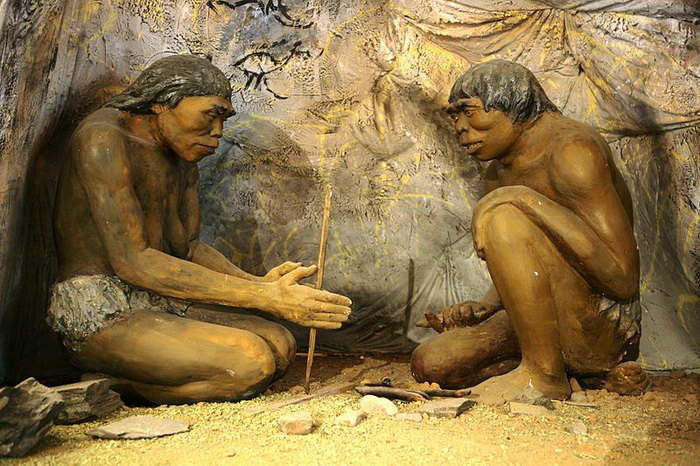 Telling the Tooth about Brains

— German researchers have come up with a new evolutionary story to chew on. —

A paper from the Max Planck Institute published in Science Advances on August 17 is titled, “The cost of chewing: The energetics and evolutionary significance of mastication in humans.”

The Complexities of Chewing

Chewing (mastication) breaks down food into small chunks so that it can travel through the esophagus to the stomach. It also increases the surface area of the food, allowing digestive enzymes to break it down further. Chewing is a complex process. The mechanical grinding of food into small pieces requires many different structures, such as teeth, the mandible (jawbone), tongue, and eight muscles. These must all work harmoniously together, with the nervous system controlling them all, to achieve function.

The Evolution of the Mastication System

Since creation is ruled out a priori by evolutionists, the only alternative to explain the origin of mastication is evolution. Consequently, Adam Casteren, the lead author in the explanation reviewed below, must assume that this complex mechanism exists as a unit: “We assume that natural selection produced jaws, facial muscles, and teeth that make the chewing system as efficient as possible, thus minimizing the energy spent chewing food… We therefore think that how we humans chew today has been optimized by evolution.”[2] This optimization, he points out, was even more important to our ancestors.

Modern humans … don’t chew very much because we cook and process all of our foods before we eat. But our ancestors would have been spending a lot of time chewing. …  our early hominid ancestors may have been chewing for five or six hours a day…  which may have cost them up to 5 percent of the energy they consumed. It’s possible that this drove the evolution of the form or muscle architecture of the jaw, or changes in tooth morphology.

However, what they found does not help the case for evolution. 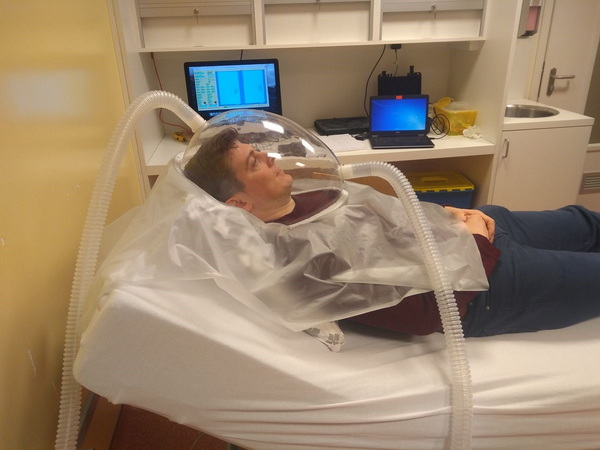 The apparatus used in the Casteren et al. experiment.

The team placed 6 men and 15 women volunteers between age 18 and 45 in ventilated hoods designed to measure metabolism by proxy: specifically, oxygen uptake and CO2 output. The authors then calculated each participant’s energy expenditure. The volunteers sat still with their head inside the chamber for 45 minutes to obtain a baseline measurement of energy expenditure at rest. The volunteers then chewed an odorless, flavorless gum while inside the chamber for 15 minutes. The researchers tested two different gum stiffness levels, soft and stiff. The subjects were not to swallow the gum because it would increase the metabolic rate in the digestive tract, increasing energy expenditure.

They found that soft gum increased the energy expenditures by ten percent over the baseline, and the hard gum boosted energy use by another 15 percent.[3] The results were obvious: stiffer gum requires more energy to chew. From this data, Casteren et al. concluded that cooking with fire softened food, requiring less energy and time to chew. This would have allowed pre-humans to spend time on other things, like making tools. Conclusion? Cooking also allowed more calories from meats and starchy foods to be absorbed, which “changed the entire energetics of modern humans. And … it’s allowed the formation of a very large brain.”

The metabolism of chewing is still “one of the fundamental questions of evolution … as it may tell us how cooking represents a turning point in humanity’s evolutionary trajectory.”[4] In other words, evolutionists postulate that pre-humans discovered how to make fires and then invented cooking using fire. Cooking, therefore, allowed humans to absorb more calories. One thing led to another. This, in turn, allowed our brain to develop more rapidly. And that is why we humans become modern big-brained apes.

Cooking Up a Story

The use of fire to cook, which, in turn, inspired human evolution, is not a recent idea. The use of fire, particularly to cook food, is widely postulated by evolutionists as a major step in human evolution, allowing humans greater access to certain nutritious foods and thus brain development.[5] So that part of Casteren et al.‘s story is not news.

As they explain it, cooking with fire liberated modern humans from lengthy bouts of daily mastication. As evidence, they point out that, in comparison, the great apes chew considerably longer than humans do. Chewing time ranges from 4.5 hours in Pan (chimpanzees) to 6.6 hours in Pongo (orangutans). Thus, the authors argue, fire allowed humans to cook their food and spend less time chewing and more time developing tools which resulted in brain development. In contrast, our ape ‘brothers’ did not develop the use of fire and were forced to continue to spend most of their day chewing instead of inventing tools.

By this line of thinking, if orangutans had discovered fire, we may have descended from them instead of some chimp ancestor, and modern humans would look and act very differently!

Problems With the Research

This story represents typical Darwinian thinking about human evolution. It tries to answer why the human line ended up with big brains, but the great apes remained apes. Does it really help the human evolution story? It is only a thought experiment. None of the sequences in the story are based on fossils or any other direct physical evidence.

At best, the Casteren experiments that measured chewing energy on living participants is tangential to the story of how or why humans evolved large brains. The lay media, nevertheless, shared great excitement over it. Examples include the following headlines: “Hard chews: Why mastication played a crucial role in evolution”[6] and “The cost of chewing: The energetics and evolutionary significance of mastication in humans.”[7]

The research presupposes the belief that humans began to use fire to cook from 500,000 to 2 million years ago. This assumes that humans consumed raw meat for eons before controlled use of fire was discovered. Actually, evidence by other evolutionists supports the idea that  humans used fire to cook their food very early in their history, even back to the Neanderthals: “it is clear that Neanderthals used fire for cooking their foods,” argues one paper from 2017. [8] Furthermore, that evidence is very persuasive among evolutionary paleoanthropologists: “The fossil and archaeological record of Neanderthals is the most complete among our hominin relatives, and there is clear evidence at many sites that Neanderthals used fire and cooked their food.”[9] 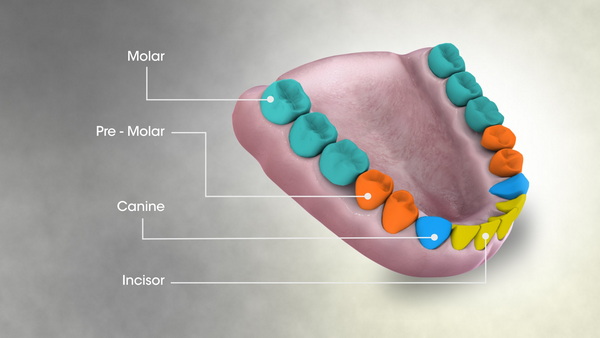 The four types of human teeth. Note that both those used for carnivores and herbivores are included. This diagram correctly included wisdom teeth, (or 3rd molars), which are not vestigial. From Wikimedia Commons.

Within the evolutionary timeline, evidence of humans’ first controlled use of fire goes back to the earliest known humans.[10] Furthermore, the claim that our putative pre-humans first used fire 500,000 to 2 million years ago is very controversial.[11] Without fire, the hominid diet must have been limited mostly to plant parts including seeds, flowers, and fleshy fruits composed of simple sugars and carbohydrates. The stems, mature leaves, enlarged roots, and tubers would have been inaccessible as a food source due to the indigestibility of raw cellulose and starch. Yet historical records demonstrate that all these foods were common in the diet of humans throughout history.[12]

Cooking made starchy and fibrous foods edible and greatly increased food diversity to early humans. Toxin-containing foods, including certain seeds, could now be incorporated into human diets because cooking detoxified them.[13] Naama Goren-Inbar, of the Institute of Archaeology at Hebrew University of Jerusalem conducted excavations of the archaeological site Gesher Benot Ya’aqov. According to Goren-Inbar’s findings, the humans who once dwelt there had mastered fire-making at a site which is Darwin-dated back to nearly 800,000 years ago. This and other findings support the notion that fire use existed back to very early in human history, negating the belief that fire helped pre-men evolve into modern men.[14]

Another problem with the story concerns embryonic development. The major amount of brain development in a human happens before a child has teeth. In the earliest months and years, children live on mother’s milk. Then parents start with soft food, like mashed bananas or papayas. The human brain is mostly full grown before children are ready to learn tool-making.

The Bible record agrees with archeological findings of early fire use.  Fire was used not long after Adam was created. Answers in Genesis notes that “by Genesis 4 Cain and Abel were making sacrifices (whether burned or not, the Bible does not say)”, and later on in the same chapter we are told that Cain’s descendant Tubal-Cain “forged all kinds of tools out of bronze and iron”—which obviously would require a major heat source like fire.[15]

The Casteren story proposes that the use of fire allowed pre-humans to spend considerably less time chewing and allowed more time for them to involve themselves in activities such as making tools, walking upright, and other enterprises that developed their brain. This, in turn, was one of the factors that evolutionists claim helped to further our progress toward big-brained modern humans. Learning how to control fire by early human ancestors, they say, resulted in the origin of cooking. Being able to chew less on softened meat and plants supposedly required less chewing.

Many critics of this tale—both creationists and evolutionists—consider this only an imaginative story. They recognize that the argument that cooking gave human ancestors more time to evolve big brains and invent the human tool, which in turn facilitated more rapid human evolution, does not fit the evidence for early use of fire. 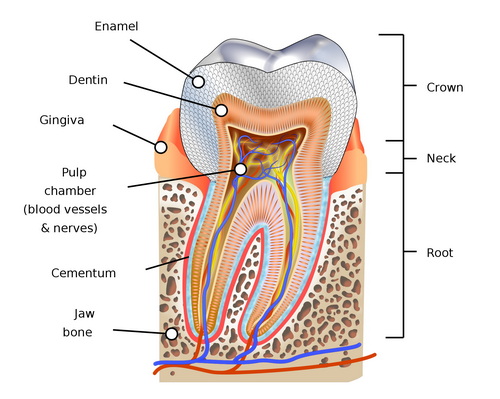 Diagram of a tooth showing that they are not simple but very complex structures. From Wikimedia Commons.

[3] Mesa, Natalia. 2022. The Energetic Cost of Chewing May Have Shaped Hominin Evolution. The Scientist, Aug 17.

[6] Hard chews: Why mastication played a crucial role in evolution, University of Leiden. 2022.

Dr. Jerry Bergman has taught biology, genetics, chemistry, biochemistry, anthropology, geology, and microbiology for over 40 years at several colleges and universities including Bowling Green State University, Medical College of Ohio where he was a research associate in experimental pathology, and The University of Toledo. He is a graduate of the Medical College of Ohio, Wayne State University in Detroit, the University of Toledo, and Bowling Green State University. He has over 1,300 publications in 12 languages and 40 books and monographs. His books and textbooks that include chapters that he authored are in over 1,500 college libraries in 27 countries. So far over 80,000 copies of the 40 books and monographs that he has authored or co-authored are in print. For more articles by Dr Bergman, see his Author Profile.