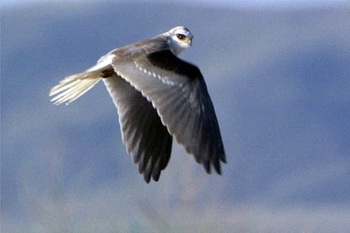 A scientist went looking for evolutionary patterns in bird brain size, but his chart shows data all over the map.  Fahad Sultan (U of Tuebingen, Germany) measured brains in a wide variety of birds, and published his results in Current Biology.1

How does brain size and design influence the survival chances of a species?  A large brain may contribute to an individual’s success irrespective of its detailed composition.  I have studied the size and shape of cerebella in birds and looked for links between the bird’s cerebellar design, brain size and behavior.  My results indicate that the cerebellum in large-brained birds does not scale uniformly, but occurs in two designs.  Crows, parrots and woodpeckers show an enlargement of the cerebellar trigeminal and visual parts, while owls show an enlargement of vestibular and tail somatosensory cerebellar regions, likely related to their specialization as nocturnal raptors.  The enlargement of specific cerebellar regions in crows, parrots and woodpeckers may be related to their repertoire of visually guided goal-directed beak behavior.  This specialization may lead to an increased active exploration and perception of the physical world, much as primates use of their hands to explore their environment.  The parallel specialization seen in some birds and primates may point to the influence of a similar neuronal machine in shaping selection during phylogeny. (Emphasis added in all quotes.)

He measured the cerebellum (a “a highly conserved part of the brain present in most vertebrates”) in birds as diverse as turkeys, owls, robins, buzzards, flamingos, crows, woodpeckers, swifts, gulls, and lovebirds, and plotted them against body size to “relate them to functional or phylogenetic differences.”  One look at his chart, though, shows no clear pattern, although similar birds cluster together in different parts of the chart.  But there are some wide differences that seem unexpected: pheasants and turkeys, for instance, fall in different quadrants, as do phalaropes and gulls.  The only statistically significant groupings he could point to were the owls vs. the crows, parrots and woodpeckers, which he attributed to functional differences in their lifestyles.  Did he find any evolutionary mechanism that would have led to these differences?

One unexpected observation was that in excellent flyers only the buzzard scores positively, and that several birds with excellent flying capabilities like the swift and falcon score negatively in the principal plane (Figure 1).  This implies that well-developed motor skills per se do not require a large cerebellum, contradicting the common idea that cerebellar size increase in birds is mainly linked to their flying capabilities.
What could be the behavioral denominator common to crows, parrots and woodpeckers that is not developed in owls?  All of these birds also have large brains; however, their cerebellar designs differ arguing against a simple co-enlargement model.  The enlargement of specific visual and beak-related cerebellar parts in crows, parrots and woodpeckers fits well with their marked adeptness in using their beaks and/or tongues to manipulate and explore external objects.  Their skills are even comparable to those of primates in using their hands.  The tight temporal coupling between motor command, expected sensory consequences and resulting afferents during visually guided hand and beak usage may be the reason why these animals need large cerebella.  The comparative analysis of the birds cerebella reveals that some brains may have enlarged to solve similar problems by similar means during phylogeny.  Furthermore it shows that large brains have a specific architecture with dedicated building blocks.

Sultan uses the word phylogeny three times in this short article.  Anyone see any phylogeny here?  His only observational, scientific data are: (1) cerebellum size and structure, (2) body size, (3) functional abilities of birds for flying and beak manipulation.  The data points are all over the map.  While there are clusterings of similar bird types in some quadrants, nothing in the data suggests any kind of evolutionary trend.  Again, evolutionary biology fails at mathematical formalism (see 08/19/2005 entry).  (This exercise in futility harks back to Broca’s detailed measurements of skull size as a way of ranking humans.)  The point is not that Sultan’s measurements are worthless or uninteresting, but only that they are useless for propping up evolutionary theory.
Add this to the growing list of Rudyard Darwin’s Just-So Stories: “Why some bird brains are larger than others.”  The short answer is, they evolved that way because they needed to.  Since a woodpecker has to have quick information (“tight temporal coupling between motor command, expected sensory consequences and resulting afferents during visually guided … beak usage” – how’s that for jargon), well wouldn’t you know it, this may be the reason why they need large cerebella.  Their need is evolution’s command: “some brains may have enlarged to solve similar problems by similar means during phylogeny.”  So off Charlie sends Tinker Bell with her mutation wand and a cheerful response for poor, slow-witted Woody, One big, specialized brain, coming right up!
It must have worked, because Woody didn’t die of starvation during however many millions of years she took to get it right.  Or, maybe Woody found a way to revive vestigial genes (01/16/2003) from some ancient ancestor: Lignosaurus, the woodpecking dinosaur.