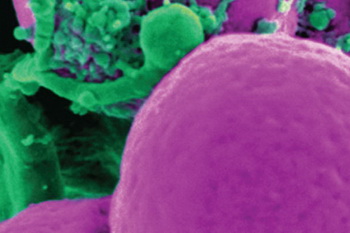 Stem cell research has not been as prominent in the popular media lately, but researchers continue to make impressive strides – mostly with adult stem cells.  Science Daily reported the first success treating leukemia with stem cells from umbilical cord blood.  A researcher at the Hutchinson Center said, “The real ground-breaking aspect of this research is that we have shown that you can manipulate stem/progenitor cells in the lab with the goal of increasing their numbers.  When given to a person, these cells can rapidly give rise to white blood cells and other components of the blood system.”
This is but one more dramatic advance in the use of adult stem cells.  Whatever happened to the rush for embryonic stem cell therapies?  It has largely been trampled by the recent stampede to use adult tissues and induced pluripotent stem cells (06/06/2007, 10/24/2009, bullet 12).  Dr. Gregory Brent (UCLA) told an audience Saturday night that embryonic stem cells have yet to produce one treatment, while adult stem cells are currently treating millions (if you include bone marrow transplants – a form of adult stem cell therapy).  Dr. Brent believes the momentum has clearly shifted away from research on the ethically-questionable embryonic cells toward therapies with adult cells, because that’s where real progress is being made (e.g., 02/23/2009, 12/17/2008).
The funding tells a story of shifting priorities, too.  The Family Research Council noticed this month that only four of the 14 research grants funded by CIRM, the institute California voters authorized in 2004 to use $3 billion in tax revenues to further stem cell research (see 04/30/2008, bullet 3), deal with embryonic stem cells.  Advocates of embryonic stem cell research do not expect any treatments for a long time (10/13/2006).
The Christian Medical and Dental Associations website contains dozens of resources on the ethical issues regarding embryonic stem cells and other beginning-of-life and end-of-life questions.

Do you remember the hysteria in the mid-2000s about embryonic stem cells?  Do you remember how anyone opposed to ES research was portrayed as uncaring, unloving and hung-up on outmoded religious scruples?  Do you remember how President Bush was savagely attacked by the scientific community for providing a carefully thought out compromise, after he had consulted numerous scientists and ethicists about the issue, because his decision did not give free rein to all the scientists’ desires for complete freedom to cut up human embryos? (08/11/2004, 07/31/2006).  Do you remember the tear-jerking commercials by celebrities suggesting that only embryonic stem cells provided hope for cures to Parkinson’s and other crippling diseases?  Do you remember the glorious promises of miracle cures right around the corner?  Do you remember the guilt trip they all put on voters for raising questions about ES cells, because poor victims would remain without hope, while the Nobel Prizes would go overseas and American scientific prestige would be irreparably damaged?  Do you remember how financially-strapped California voters were lured into shelling out $3 billion for what has turned out to be a colossal boondoggle?  Do you remember the Gold Rush mentality?  Do you remember the Hwang scandal that resulted? (01/09/2006, 02/05/2006).  You should.
Fortunately, CIRM has been watching the trends, and is now channeling the bulk of research funding on adult stem cells – but only because that’s where success is coming from.  Democrats and liberal scientists got what they wanted from Obama (01/31/2009) but have little reason for pursuing their pet vice now that iPS provides almost everything they need for curing disease – without the ethical problems of embryonic stem cells.  ES research requires the creation and destruction of human embryos and/or the harvesting of human egg cells.  To revisit the shameful news about embryonic stem cells over the last decade, type “embryonic stem cells” into our search bar above.  Then for an exciting list of actual miracle cures and promising research leads, type in “adult stem cells.”
Exercise:  Considering the outcome of the stem-cell hysteria of the last decade, what other passionate claims are coming from the scientific elitists today, demanding swift and immediate public support?  What should be our response?