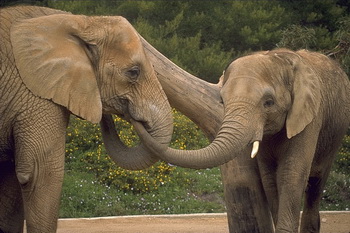 My, what big teeth you have:  A marsupial saber-tooth cat with fangs like steak knives had a “embarrassing” bite no worse than that of a pussycat, Live Science claims.  Mechanical analysis shows that to use them without ripping them out of their sockets, the beast would have had to insert them with “delicate precision” – a hard thing to test, since scientists lack the ability to watch the predators in action.  The BBC News story included an artist’s conception of what the marsupial might have looked like (with artistic license for coat color and environment); other reconstructions make it look much more like Smilodon, the placental saber-tooth cat.  What’s more surprising is the evolutionary angle.  The marsupial supposedly had nothing to do with its placental look-alike:

Named Thylacosmilus atrox (“pouch saber”), the animal was about the size of a jaguar, but “looked and behaved like nothing alive today,” paleontologist Stephen Wroe said in a statement. Superficially, Thylacosmilus resembled the saber-toothed cats of the Pleistocene, like the North American icon, Smilodon fatalis. Both have long canines designed to attack large prey, but the animals were separated by at least 125 million years of evolution, researchers say.

Tough but sensitive:  What could be tougher than crocodile scales?  Yet the scary beasts have a “supersense” in a “previously misunderstood” delicate organ, Science Daily reports: the ability to sense touch, heat, cold, and the environment in their skin.  It wouldn’t seem that a skin so hard it cracks when it grows would be so sensitive, but inside those cracks are “integumentary sensory organs” (ISO’s) that help the croc find food even in dark, murky water.  Their skin provides multiple types of information: temperature, touch, and chemicals in the environment.  There is “no equivalent in any other vertebrates,” the article states.  “It is this transformation of a diffuse sensory system, such as we have in our own skin, into ISO which has allowed crocodilians to evolve a highly armored yet very sensitive skin.”

Communal glow:  A short post on Science Now shows that the glowworms that snare insects in New Zealand caves coordinate their light to maximize their catch.

Whale of an oxygen tank:  How do fin whales hold their breath and keep from imploding when they dive down 650 feet?  That mystery was explored in a brief “Science Shot” on Science Now:

Think you’re under pressure? Try diving 200 meters below the ocean. That’s where fin whales (Balaenoptera physalus) spend their time feeding. That kind of pressure would rupture our blood vessels, but whales do just fine. To figure out why, researchers compared whale arteries to those of pigs, chosen for their relation to the whale’s land-loving ancestors. Then they ran saline or water over and through the vessels. The arteries, which draw blood away from the heart, stiffened in the fin whale, while the pig arteries stretched out and collapsed under far less stress, the team reports online this week in The Journal of Experimental Biology. The finding suggests that the whales benefit from naturally occurring collagen around their arteries. Firming up to withstand the depths, this connective tissue may be what keeps whales from feeling the squeeze.

More than one way to evolve a breath:  Speaking of oxygen down deep, Nature News claims that “Animals have evolved a variety of ways to get oxygen under extreme conditions.”  Featured creatures are northern elephant seals that can hold their breath two hours underwater, ray-finned fish that possess a unique form of hemoglobin, and deer mice that live at high elevations.  The article appeared to care less about the design of oxygen deliver to tissues in these well-adapted animals as in their evolution, saying without elaboration,

Rezende … says that whereas the studies show that animals have found several ways to increase the amount of oxygen delivered to their muscles, all follow one unifying theme: all the adaptations help the animals to perform better under difficult conditions. And this is so useful that it has evolved multiple times through different pathways. “Increased oxygen delivery is almost always associated with high performance,” he says.

High performance has also evolved in several different pathways in racing cars, but….  News flash!  A beetle’s iridescent colors have survived for 49 million years!  Extra, extra, read all about it in New Scientist.

There they go again; misusing their own evolutionary theory.   The phrase “allowed such-and-such an animal to evolve such-and-such an adaptation” is nonsense.  We’ll allow you a trip to the moon without a space suit.  Go ahead when ready.  Evolutionists cannot use evolve as an active verb, “to evolve a” whatever.  Opportunity is not fulfillment.  An unguided process gives no permission.  Whatever happens, happens in Darwin’s “Stuff Happens” Law, whether the environment allows it or not.

When they say, “animals have evolved a variety of ways to” whatever, there’s another fallacy.  They’ve personified evolution as something animals or Mother Nature does on purpose for a goal.  Stupidest mythoid is this one: “this is so useful that it has evolved multiple times through different pathways.”  Evolutionists wield their theory like a magic wand, saying, “Abracadabra!  It evolved!” to account for everything, including high performance oxygen delivery to muscles.  How many mutations did that take for natural selection to filter through?

Added to the mythoid mix is convergent evolution again; animals “have evolved” multiple ways to get oxygen to high-performance muscles; saber teeth evolved in two completely unrelated mammals, separated by 125 million years in their mythical timeline.

Those of us who love animals should be able to enjoy the discoveries without the Darwin Party sales pitch.  The evolutionary hype is like those annoying pop-up ads that distract attention from the real story, which is intelligent design.