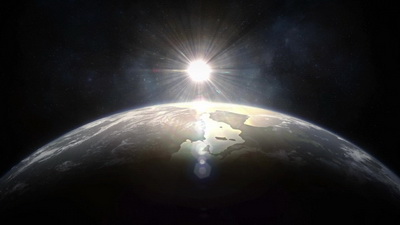 A spacecraft just took off on a mission to the sun, but not to worry; it went at night.

The Parker Space Probe is the first spacecraft to be named after a living person. Eugene Parker, discovered the solar wind in 1958. Now aged 91, the senior astrophysicist has been on hand for interviews with NASA prior to launch and was photographed beside the rocket. The successful launch took place Sunday evening, reported Fox News. In a separate article, Space.com explained why the probe needed to launch at night. The launch tried to minimize the craft’s exposure to the Van Allen radiation belts.

The probe will fly right into the sun’s “glittering crown,” or corona, explains Phys.org. Despite our opening joke, it will fly toward the sun in broad daylight, shielded by a specially-made heat shield that will keep its instruments in the 80-degree range. Astrobiology Magazine explained why “it’s surprisingly hard to go to the sun.” Several passes by Venus will be required to get it to the target, which is not the surface of the sun, but a point just under 4 million miles where it can “taste” the corona. Even though the corona is millions of degrees hot, the gas is tenuous enough not to harm the spacecraft. Parker should also become the fastest-moving spacecraft ever, clocking in at 430,000 miles per hour, thanks to the sun’s gravity.

Despite being the nearest star to earth, our sun still exhibits many phenomena that are poorly understood. Phys.org says,

Our yellow dwarf star is, in many ways, a mystery. The outreaching corona is hundreds of times hotter than the sun’s actual surface, confounding scientists. In addition, physicists don’t know what’s driving the solar wind, the supersonic stream of charged particles constantly blasting away from the sun. By being right in the thick of it, Parker should provide some answers, shedding light not only on our star but the billions of others out there.

The solar wind impacts earth, but is deflected by our magnetic shield which funnels the high-energy charged particles toward the poles, creating the northern and southern lights. In addition, the Van Allen belts trap some of the “killer electrons” before they could reach earth. Mars, lacking such protection, has seen much of its atmosphere stripped away.

The solar wind also impacts the outer planets, stripping away Titan’s methane to the confusion of planetary scientists who wonder why any methane is left.

The solar wind reminds us of the exquisite design of Spacecraft Earth. The Van Allen belts, discovered by Explorer 1 (managed by contributing CEH author Dr Henry Richter, also age 91), continue to fascinate geophysicists with their dynamic responses to the solar “shooting gallery” that endangers spacecraft and astronauts, but leaves earthlings on the surface oblivious to the threat.

If we can’t even understand our own nearby star, how can scientists claim to know so much about the origin of the universe? There’s a lot of information we can tease out of spectra, but much of the overconfidence in scientific claims comes from bluffing, not understanding. Let’s understand the sun before making grandiose claims about things far, far beyond.

Watch for a beautiful new film on the northern lights (aurora) to be posted soon by Illustra Media on TheJohn1010Project.com.