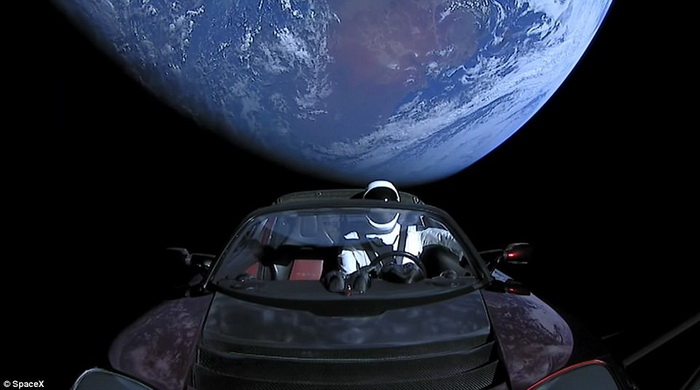 Don’t leave Earth for long. It’s deadly out there.

We live in a bubble, the biosphere, that provides our needs. From Earth’s surface, space looks serene, with stars twinkling overhead. Ancients considered the heavens a realm of sublime perfection, the Earth a sump. But in terms of habitability, the reverse is true. The physical heavens are actually a kind of hell for beings like us.

Astronauts can live temporarily in low-Earth orbit in the International Space Station, as long as all their air, water, food and protection are launched up with them and replenished at regular intervals. Astronomers know, however, that long-term exposure to space is a one-way trip to death. Look what happens to our non-living structures taken up there.

After 1-year joyride in space, Starman has probably trashed Elon’s Roadster (Live Science). A year ago, Elon Musk launched a car into space with a mannequin in a spacesuit. Here’s its likely fate a year later. 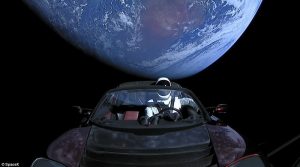 As he travels the cosmos in his exposed red convertible, Starman faces an endless barrage of micrometeorites, solar radiation and cosmic rays that will gradually rip his ride (and his spacesuit) to bits. While tiny space rocks dent and ding the car from all sides, the harsh energy of stellar radiation will slash through the carbon-carbon bonds that make up most of the car’s plastic, leather and fabric components, chemist William Carroll told Live Science last year.

Organic materials making up the car’s leather seats, rubber tires and paints may already be gone. “Those organics, in that environment, I wouldn’t give them a year,” Carroll said.

What will happen to the opportunity Rover’s dead body on Mars? (Fox News Science). Landing on another planet is no guarantee of safety. “Many human artifacts wouldn’t last very long beyond our protective biosphere,” this article says. The metallic parts of the Opportunity Rover may survive quite a while, but plastic bits will probably degrade quickly under the harsh solar radiation. Then comes the dust:

Over much longer periods, Moersch said, dust will settle on the rover. Opportunity functioned as long as it did because regular Martian winds tended to routinely blow dust off its body. But over longer periods, it’s a bit of an open question whether the dust or the wind will win out.

For a century or so, the rover may remain on the surface. But a century is a tiny, tiny fraction of the age of solar system objects, according to conventional astronomical dating. Planetary scientist Jeff Moersch speculates,

“Over the very long-term, you’re going to get impacts that knock up ejecta [airborne Mars dirt] from where they hit, and that ejecta will very gradually resurface [on] the planet and bury things that were on the surface,” he said.

If Opportunity were to be left on Mars, aliens who landed there millions and millions of years from now would find the rover somewhere in the rock record — much like how paleontologists find dinosaur fossils here on Earth.

Moersch did not mention whether said aliens would be able to infer intelligent design in the rover.

Complex Life Might Require a Very Narrow Habitable Zone (Universe Today). The Kepler Spacecraft initially encouraged secular scientists with the estimate that some 40 billion Earth-like planets could exist in the Milky Way galaxy. A new study revises that estimate way down, when the fine-tuning of factors is considered. Oxygen alone, for instance, is not a sufficient biomarker. Too much oxyen, or oxygen in the form of carbon monoxide, could squelch life instead of promote it. The problems are particularly acute for M-dwarf star systems, the most common in the universe.

To complicate matters further, this study is one of several to place additional constraints on what could be considered habitable planets of late. In 2019 alone, research has been conducted that shows how red dwarf star systems may not have the necessary raw materials for life to form, and that red dwarf stars might not provide enough photons for photosynthesis to occur.

All of this adds up to the distinct possibility that life in our galaxy may be rarer than previously thought.

These stories add up to the conclusion that if someone looks forward to Star Trek travel through the universe, they had better plan on taking a good deal of Earthly heaven up with them to survive the hellish conditions they will encounter.

See also: “Life probably can’t exist on quite as many planets as we once thought” (MIT Technology Review), based on the paper by Schwieterman et al, “A limited habitable zone for complex life” (arXiv).