No, Darwin Did Not Win a Nobel Prize

Only by the most egregious twisting of terms could one call what these scientists did “evolution.”

“Directed evolution” is a contradiction in terms. It’s like conjuring up visions of “natural voting” or “unguided targeting.” It’s like “blind sight” or “deaf hearing.” If terms mean anything, what Marcos Alcocer says in The Conversation is absurd, or dishonest, like defending Orwell’s 1984 slogan, “War is peace, freedom is slavery, ignorance is strength.”

The Nobel Prize in Chemistry 2018 has been awarded to three researchers for their work on “harnessing the power of evolution” to create compounds that are of benefit to humanity. One half of the nine million Swedish kronor (£770,686) prize will go to the American Frances Arnold from the California Institute of Technology, US. The other half will go jointly to the American George Smith from the University of Missouri, US, and the Brit Gregory Winter from the MRC lab in Cambridge, UK.

Their work centres on techniques of “directed evolution” – a method which imitates natural selection. This can help to create new powerful proteins that achieve specific tasks.

This critique intends no disparagement of the prize winners, who evidently “transformed research and saved lives.” But they didn’t do it by evolution. They did it by intelligent design.

And yet all the media, Nature included, are framing this win as a victory for ‘natural selection’ theory. Nature allows this ignorant statement from Sweden:

During the prize announcement, Claes Gustafsson, chair of the Nobel Committee for Chemistry 2018, noted the benefits of the researchers’ work for humanity: “Our laureates have applied principles of Darwin in the test tubes, and used this approach to develop new types of chemicals for the greatest benefit of humankind.”

What the winners achieved had absolutely nothing to do with Charles Darwin’s theory. To really mimic Darwin’s ‘natural selection,’ the winners would have turned out the lights, walked out the door, and let stuff happen. The moment they made an observation and selected something on purpose, they murdered Darwinism.

The media, however, continue mixing Darwin with design, mixing darkness with light. Live Science says, “Chemistry Nobel Awarded to Scientists for Taking the Reins on Evolution.” The moment anyone takes the reins on evolution, stuff stops happening by chance. Intelligence takes over. Darwin-worshiping reporter Yasemin Saplakoglu turns out the lights of logic, making evolution out to be a creative genius:

Every living organism on this planet is a sculpture of evolution. Now, evolution is also unfolding in the lab.

This year’s Nobel Prize in chemistry was awarded to three scientists for their work in harnessing the power of evolution for a variety of applications that benefit humankind. These new applications helped create biofuels, pharmaceuticals and antibodies that fight disease.

A Long History of Fallacy

Seeing design in nature, Darwin was trying to achieve it without a Designer, by ascribing creative power to the Stuff Happens Law, which is the opposite of what breeders do. Breeders have a goal. They can role the dice, but they know what they want, and they steer variation toward it. Doug Axe exposes the fallacy at Evolution News, showing that the Nobel Prize was a vindication of intelligent design, not evolution. Nature cannot ‘select’ what does not already exist, he argues. And the word ‘selection’ itself implies a Selector. A philosophical naturalist cannot personify nature as a selector. Selection is not natural; it is a choice made on purpose by an intelligent agent. Even a robot playing ‘Maxwell’s Demon’ (21 Sept 2018) makes a selection based on choice programmed by its designer.

Can the Fallacy Be Rationalized?

Perhaps their idea of ‘directed evolution’ could be defended metaphorically, the way we use oxymoronic language to refer to ‘black light,’ realizing that ultraviolet radiation is not really black, but just invisible to human retinas. We know that UV light is just as ‘real’ as white light, and would appear bright to a creature able to perceive that part of the electromagnetic spectrum. That’s not what is happening here. The media are specifically referring to Darwin’s principles being employed by the prize winners. It’s not a stylistic oxymoron, used for effect; it’s illogically sophoxymoronic. 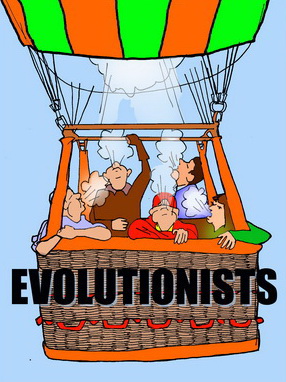 Maybe the media expect us to see part Darwinism and part design, giving some credit to both. Darwin can have the mutations, and ID can make the selections. Alcocer tries that angle, but it doesn’t wash, because the media portray what the winners did as the same essential process used by their material view of nature to evolve human beings without any intelligent guidance:

One of the most crucial characteristics of evolving organisms – life as we know it – is the ability to replicate and mutate. All organisms can make copies of their genes and undergo changes that are passed to their progeny. In other words, we are totally dependent of evolving chemicals.

Arnold’s work focused on the directed evolution of enzymes – proteins that accelerate chemical reactions. Because they are so useful, scientists had long tried to create enzymes with desired properties artificially, but with little success.

Arnold – who is the fifth to join an important group of women to win the Nobel Prize in Chemistry – instead developed a method to produce mutations in the genes that produced certain enzymes in order to select the best ones. Different mutations will produce slightly different versions of the enzyme in each cell so, over time, one can select the one which works the best for a specific task.

Arnold’s discovery was hugely important – creating a completely new way to design and produce pharmaceuticals and renewable fuels for a greener transport sector.

The logical flaw in “directed evolution” cannot be overemphasized, because Big Science (BS) and Big Media (BM) are using the Nobel Prize announcement to promote a serious fallacy to a largely unwary readership, who are being led to believe that Darwin’s theory is bearing good fruit in our day. Nothing could be farther from the truth. Darwin envisioned a world of blind, pitiless indifference, where stuff happened in random directions, and nobody was around to care (see “Time to Ditch Natural Selection?”, 3 October 2015). To the extent that these prize winners acted out of compassion to advance human health and well-being, they illustrate the image of God in man, not the image of Darwin.

Glorifying Darwin for what these scientists achieved using design is like awarding a Pulitzer Prize to a plagiarist. No; worse. It’s like putting a crown on a dirt pile and calling it a god. I’m honestly having a hard time coming up with an analogy for how rotten this reasoning is. Help me out; send your idea in the comments.