Paleoanthropologists’ unshakeable faith in Darwin and millions of years forces them into an absurd scenario.

Once upon a time, there was a cave. And there were cavemen: three kinds. Let’s call them Denisovans, Neanderthals, and modern humans. This cave, they felt, was such a hot property, they decided to share it. And so they did – for 300,000 years.

Unbelievable? That’s what paleoanthropologists are claiming this week. “Ancient-human species mingled in Siberia’s hottest property for 300,000 years,”  Ewen Callaway writes. His headline is: “Neanderthals and Denisovans both called Denisova Cave home — and Homo sapiens might have, too.”

Neanderthals and Denisovans might have lived side by side for tens of thousands of years, scientists report in two papers in Nature.

The long-awaited studies are based on the analysis of bones, artefacts and sediments from Denisova Cave in southern Siberia, which is dotted with ancient-human remains. They provide the first detailed history of the site’s 300,000-year occupation by different groups of ancient humans.

Recorded human history only goes back about 3,500 years. With artifacts, we could stretch it more. Let’s grant evolutionists 10,000 years for known history we can discern from human activity, discounting the long ages that depend on Darwinian assumptions. This is the human history we see in writing and in buildings. In that period of time, humans went from huts to the moon. Can anyone possibly believe that fully-capable human beings like us, and their descendants, would stay in the same cave for 300,000 years? Imagine a caveman today claiming he can trace his family tree back to a caveman in Nimrod’s time, and then multiplying that by 100 times. This is the absurdity we are dealing with. Are we to believe the caveman’s ancestors never thought of a better life?

Dating of hominin discoveries at Denisova (Nature). In this related article, Robin Dennell claims a “rigorous and compelling timeline” for this “ancient-human hotspot,” based on dating of human artifacts. Dennell tosses around dates covering hundreds of thousands of years for people like us, and even bluffs with dates to 4 significant figures! And yet earlier, he admitted that

analysing ancient deposits is tricky. Layers can be disturbed by animal burrowing, subsidence or freeze–thawing cycles. Small items, such as fossil bones or stone tools, might be displaced from their original positions and not be the same age as that of the layer of deposits in which they were found.

Yet trusting in the work of the researchers at Denisova Cave in Siberia, he pushes onward with the tale of Darwin’s fantasy cave. When dates conflict, storytelling comes to the rescue:

With this kind of freedom to speculate, any story is possible.

Although there might still be some uncertainty about the detailed ages of the remains — given the nature and complexity of the deposits and the dating methods used — the general picture is now clear. Deposition of sediment deposits at Denisova was episodic, but extends from MIS 9 to MIS 2, and the site was occupied by Denisovans and by Neanderthals in both cold and warm periods from approximately 200,000 to 50,000 years ago.

Evolutionists themselves know this must be untenable. Given human nature, if there were any differences in skin color or features between Neanderthals and Denisovans, one would have exterminated the other or driven them out, saying, “My cave!” That any human with a full-sized brain, upright posture and ability to have controlled use of fire for cooking, make tools, art and hunting equipment would live like this for 300,000 years beggars the credibility of any rational person. 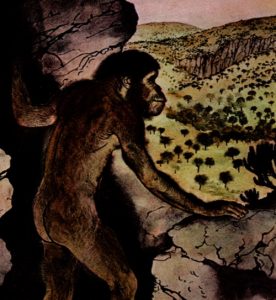 Evolutionists have portrayed human ancestors in racist ways for decades: dark-skinned, naked, hunched over, stupid. This was from a Time-Life book for young children, 1968.

Why, then, do they believe it? One-word answer: Darwin. They have to have millions of years to get from apes to man. What are they going to fill those years with? One-word answer: divination. Artifacts, stone tools, and bones become their relics with which to call on the spirit of Darwin to “shed light” on the upward progress from monkeys to men. The racism is evident in this worldview. Those ‘other’ human beings must have been beneath us not to have worn buckles on their shoes.

Look; we make tools today that differ widely in design, from dime-store varieties to high-tech counterparts. They are are contemporaneous, not evolving. Are we supposed to lay them out on a make-believe timeline covering hundreds of thousands of years, and weave a story about how their makers evolved over all that time, progressing upward in intelligence until they finally reached the pinnacle of us, who (wow) can make paper airplanes? Oh, but it sounds so authoritative when they use jargon. It sounds so highfalutin when they appeal to “zooarchaeology by mass spectrometry (ZooMS)” or “thermoluminesence and optical stimulated luminescence” (each with its own drawbacks, Dennell admitted; some of them must have given politically incorrect dates). The target dates that the storytellers want for their timeline is set before they run their dating techniques. Any dating method will scream and cry uncle if you torture it enough. Results that don’t support the plot can be thrown out and never reported. The play must go on! Remember, these are the storytellers who keep changing the scenes every month, saying ‘Everything you know is wrong!’ The only thing that never changes is the Darwinian foundation. These are the racists who invented the “Ascent of Man” icon, now completely discredited. These are the ‘scientists’ who committed historical racism against our Neanderthal brethren (27 Jan 2019). Why do we listen to them?

If you take out the requisite Darwinian foundation, the timetable appears ridiculous on its face. Do it. It’s like turning off the blacklight in a spooky theater and turning on the house lights—you go, ‘What? Is that all I’m looking at? It’s fake!’ No self-respecting member of Homo is going to pass on his communal cave to 30,000 generations and condemn them to the same lifestyle. What a stupid story! We know human nature. People are restless; they want a better life, if not for themselves, for their children. Claiming they couldn’t change habits or do better than live in a cave for hundreds of thousands of years because they were too dumb is inherently racist. It’s going to take an uproar from people outside the ivory tower to shame these Darwinites. Don’t let them play blind man’s bluff on you; take the blindfold off and turn the lights on. 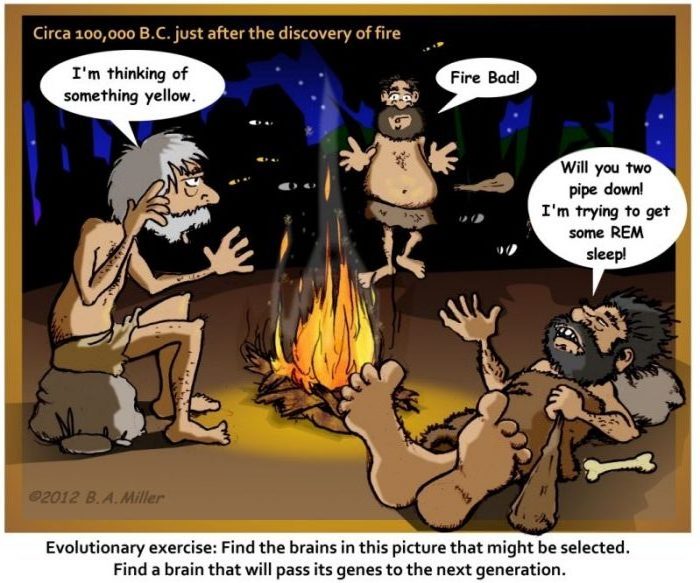