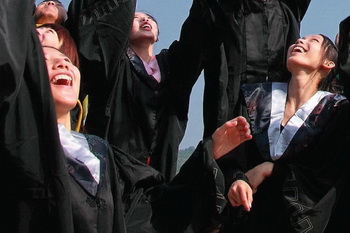 In a “Book Talk” segment, National Geographic writer Jane J. Lee let her bias known right in the headline and sub-heading: “Why Bill Nye Calls Evolution ‘Undeniable’ and Creationism ‘Inane’: Darwin’s theory explains so much of the world, from bumblebees to human origins, says the Science Guy.

Jane threw softball questions to Bill Nye about his new book, Undeniable: Evolution and the Science of Creation.  She began by reviewing Nye’s debate with Ken Ham: but don’t expect equal time for Ham in this piece, nor any quotes from the hundreds of books in the Answers in Genesis bookstore at the Creation Museum in Kentucky, where the debate was held last February (2/04/14). Instead, she let Nye trash creationism with emotional remarks like, “The inanity took my breath away.”

Emotionalism and storytelling is actually a running theme in Nye’s responses. He’s proud of it. Scientific facts are sorely lacking in the article; instead, evolution is portrayed in broad brush strokes as a fact beyond debate. Nye is so passionate about crushing this “inane” worldview, he doesn’t need facts. He needs to attack it with emotion.  Here are some examples with references to fallacies defined in the Baloney Detector:

There’s little scientific support for evolution in this interview. In fact, there’s none. It’s all emotion. It’s all generalities and assumptions, stated with feeling.

Another running theme is one Nye hammered in the debate with Ken Ham: we need to believe in evolution or else America will lose its scientific lead in the world:

But I think taxpayers will realize that you can’t remain competitive in the world, economically, without successful scientists and especially engineers—people who use science to solve problems and make things. I think people on both sides of the aisle will soon grasp that you can’t be successful and ignore science.  [non-sequitur, fear-mongering, red herring, equivocation, subjectivity, loaded words, association, big lie]

It’s historically inaccurate to say that doubting Darwinian evolution equates to “ignoring science” given the eminence of Victorian and 20th century scientists who knew a lot about evolution yet opposed it (Maxwell, Faraday, Pasteur, Lister, Carver, von Braun, Damadian, and dozens more). Nye also errs by calling evolution a “discovery” by Darwin and Wallace. Certainly those two discovered a lot of species, but evolutionary theory was more a proposal for a natural mechanism that they believed tied many disparate facts together; it was not a discovery. Yet Darwinism remains highly controversial today—not just among creationists.  A growing group of secular biologists are daring to defy it out of dissatisfaction with the neo-Darwinist consensus (see The Third Way website). Nye also confuses Darwinism (a biological theory), with astronomy and cosmology.

Ironically, some of the very things that fascinate Bill Nye about science are phenomena creationists use as evidence against evolution:

What we want everybody to experience in science education and science is the joy of discovery.

Creationists have long argued that flight is an irreducibly complex function that defies Darwinian processes (see Flight: The Genius of Birds). Nye also stresses the importance of engineering—a design-focused enterprise. Speaking of flight, it was by watching birds that the Wright brothers were inspired to create a flying machine. That’s one in a long series of engineering achievements based on biomimetics, the imitation of nature’s designs. That tradition continues today as scientists build flying robots modeled after hummingbirds, dragonflies and bats.

“We’ve gotta take care of this place,” Nye ends. “Those discoveries come from understanding evolution.” But if he were a consistent Darwinian, he would stand back while unguided, purposeless, aimless processes of nature let stuff happen. It takes ethics, morality, and the long view of things to take care of the world. Those require intelligent design.

The short interview ended with a long string of emotional comments, a few of them thoughtful, but most not any more informed or sophisticated than “you guys are poopy.”

There it is: Bill Nye the Scientism Guy confesses to storytelling! He admits it! He’s proud of it! We need to indoctrinate children with emotional stories, he says, so that they will be compliant lemmings, letting the government lead them down the primrose path to stop global warming and fracking without having to know anything about the evidence. Where is his concern about healthy skepticism of authority? With Nye, it’s (1) Darwin is fact, (2) creationism is silly, (3) trust me. He’s more for passion and advocacy than a stickler for facts, logic, or critical thinking. The guy is clueless about philosophy of science. He’s a bombastic apostle for his idols, Darwin and Sagan.

Exercise: Write a list of questions you would ask Bill Nye if you had the chance. Look for ones that show his assumptions to be self-contradictory or self-refuting. We gave you one clue in the paragraph above about “a consistent Darwinian.” Hone in, also, on his feelings of “the joy of science” and ask him how that evolved, if the goal of natural selection is passing on one’s genes.

Exercise: Are there any of the fallacies in the Baloney Detector that Bill Nye did not commit?  (This is a tough one.)